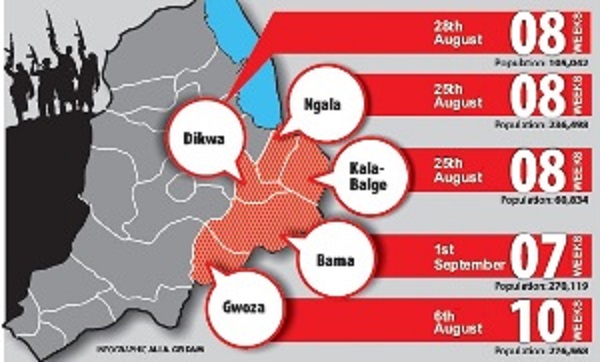 The House of Representatives yesterday passed a resolution in which it reminded the Federal authorities that a number of local government areas in Borno State are still under the control of Boko Haram insurgents.
In the resolution, lawmakers urged for provision of additional troops in order to retake the towns and villages that the insurgents seized in August and September.
Rep Abdurrahman Terab (PDP, Borno), who introduced a motion that led to the decision of the House, said Ngala, Kala-Balge and Bama LGAs, which form his constituency, are still being controlled by insurgents, contrary to claims that they had been liberated.
“Contrary to earlier reports that the said local government areas were reclaimed by the Nigerian government and are now under the control of Nigerian troops, they are still under the control of the Boko Haram,” he said.
Daily Trust reports that apart from the three listed areas, Gowza and Dikwa LGAs of Borno State have also remained in the hands of insurgents since August.
Terab said as a result of the seizure of the local governments in his constituency, arbitrary killings are going on there and that the insurgents are enforcing their own laws on people.
“Young women and teenage girls are not being spared, as they are facing all sorts of abuse, torture and forced marriages,” the lawmaker added.
Terab said people who fled the overrun areas into Cameroon, “numbering almost 200,000 and who are mostly from Ngala and Kala-Balge local government areas, are living without basic requirements, like food and shelter.”
He acknowledged that soldiers battling the insurgents are doing their best despite the challenges of inadequate manpower, arms and equipment. He urged the Federal Government to take further steps towards retaking the affected areas from insurgents.
Soon after Terab presented his motion, Rep. Forte Dike (PDP, Anambra) opposed passing it, contending that there have been “incontrovertible statements in the media saying that the areas are no longer under Boko Haram control.”
But lawmakers shouted him down, and thereafter resoundingly voted in support of the motion when it was put to vote by Speaker Aminu Tambuwal.
In its resolution, the House also urged the National Emergency Management Agency (NEMA) to liaise with Cameroon in providing relief to refugees from Borno now staying in Cameroonian towns.
Boko Haram insurgents began their capture of territory in Borno with the seizure of Damboa on July 19, but they were chased out by the military within weeks.
Subsequently, they seized Gwoza on August 6, and moved on with lighting speed, overrunning Gamboru-Ngala on August 25, Dikwa on August 28 and Bama on September 1.
The insurgents also took over Buni Yadi and Bara, two local government area headquarters in Yobe State.
Later in September, Boko Haram moved southwards, overrunning Madagali, Gulak and Michika in Adamawa State. These three towns were reported to have been liberated by the military earlier this month, but authorities have yet to confirm this.