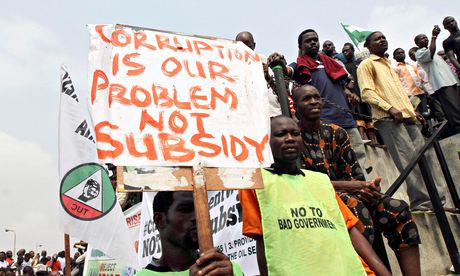 After Julius Caesar’s assassination in a palace coup, in 44BC, the coup plotters led by Caesar’s close friend Brutus had to mount a public podium to explain to the commoners why they had committed regicide. As they were going to the public place in company of the plebeians, we read in Shakespeare’s play Julius Caesar, there were voices from the crowd yelling at the coup plotters, “We must be satisfied!” “Let us be satisfied!”

Nigerians… who have decided to stage a mass rally in the country’s major cities tomorrow, are like the plebeians of the old Roman Empire. While the Romans demanded an explanation for Emperor Caesar’s murder by Brutus and co, Nigerians will be requesting an explanation for the mass murder of poor people through hunger and starvation.

A rally would have been unnecessary if the leaders of Nigeria had been forthcoming with explanations for their perceived wickedness. Instead, they have been feigning ignorance of the true situation in the country. A source in the presidency told me how a minister approached another highly placed leader to tell him that Nigerians were dying of hunger, and he replied, “Is there any time they were not dying?”

Rather than sponsor a counter-rally tomorrow, the presidency should have borrowed a lesson or two from the Roman conspirators of 2, 061 years ago. Brutus was well-prepared with explanations to give his people. Though he was conscripted into the plot, he accepted responsibility. He told the plebeians that he killed his best friend for the sake of Rome.  He said he had the same sword with which he struck Caesar with him, and that the people could use it to kill him whenever it pleased them. The masses were about to forgive the conspirators until Mark Antony spoke.

Would it not have been better for our leaders to assemble the best team available that would address the mass rally tomorrow rather than to defend the indefensible? After all, the current leaders were the same people that sponsored or participated in the mass rally of January 2012 to protest a withdrawal of fuel subsidy which shot the price of petrol from N87 to N130. At the time, we the then opposition asserted that there was no fuel subsidy in the first place and that it was a scam to enrich a few. The politicians who are now in power promised to make a litre of petrol N40. The price has reached N145 since May last year. The subsidy, we were told, had disappeared; today, we hear that the subsidy is back and the price of petrol is set to rise again. It was strange that no mass rally was organised in May, when the APC government jacked up petrol’s price.

Nevertheless, TuFace and his supporters will not be the first to express their grievances.  Many of us have been protesting all this while. In our columns, in the social media, in the mainstream media, in our homes, in workplaces, in markets, in churches and mosques – wherever Nigerian have gathered – we have been lamenting the hell that Nigeria has become. It seems, however, we have been talking to deaf, dumb and clueless people in power. Already they have indicated that they wouldn’t welcome the TuFace rally tomorrow. The Lagos police commissioner said he would lock up TuFace and stop the rally, but he would welcome the counter rally. In the 21st century? In a democratic Nigeria?

I participated in many rallies led by Gani Fawehinmi,  Beko Ransome-Kuti, Tai Solarin, Dozie Agbakoba, Chime Ubani, Femi Falana and several other human rights activists in Lagos in the 1990s. In those days, we felt that only military dictators were intolerant of protests. Now we know that what every Nigerian government seeks is a docile citizenry: don’t talk, don’t cry, just endure the pains or die in silence.

By now, the leaders of Nigeria ought to have known why we are protesting. Or do they not? I’ll give them a few reasons: No fewer than 50million Nigerians are now threatened by death from starvation. Millions have died in the last one year!  Little money is circulating in the country because the Buhari regime has locked up all the money in the TSA and has refused to spend it. It’s a case of double or triple tragedy: the naira that Nigerians hold has lost 70% of its value within just one year; prices of goods and services have skyrocketed; and even the devalued salaries that workers used to earn are not coming. Some federal agencies and state governments can’t pay salaries. Private-sector employers including banks have sacked their staff and are not employing new hands. Debtors can’t pay their loans.

The sick can’t seek treatment in hospitals because the bills are not affordable. Medicines’ prices have hit the roof! So many are alive today in Nigerian just by God’s grace. Once again kwashiorkor has resurfaced.  It’s only during this period that I’ve seen people dying in the streets of Abuja as a result of hunger. For the first time, too, “thieves” have invaded farmlands at night or stolen pots of food while still on the fire.

Why wouldn’t this level of hunger exist when kerosene costs more (at N400 per litre) than the food it’s used to cook? We’re no longer talking about the non-payable school fees and house rents; even transport fares have become a luxury. Car owners can no longer put fuel in, or maintain, their cars. Need I say it again? Every government is measured by the amount of good life it provides for the people. Nigeria is no longer in a recession; it’s in a great depression.

All these might be fiction to the beneficiaries of Nigeria’s unjust system: Ex-governors who take more than N1billion each annually as pension and other entitlements for “meritorious services” to their fatherland. Senators who earn N20–30million monthly for shouting “aye” or “nay” once or twice a month. House of Reps members who get N15–20million monthly for doing practically nothing. Ministers who are maintained with at least N20million every month. State legislators, local government administrators and traditional rulers who get shares from our common patrimony on a regular basis for no visible job except perhaps keeping their people calm in the face of this hellish condition. We’re not yet talking about evil (sorry, “civil”) servants whose pastime is padding budgets and rearing ghost workers. A few years ago, we were told that government assets had been sold; today, our leaders still drive exotic cars bought with public funds and they own them after four years or so. Each still lives in a government house or an apartment rented by government at inflated prices. There’s no end to the abuse of their privileges.

It’s what writer Odia Ofeimun once described as a “rigged income policy” orplutocracy. I would want to believe that the setting up of a presidential taskforce on food security on Wednesday was a diversionary tactic meant to douse tension in the land and probably mitigate the effects of the proposed TuFace-led rally.

“The trouble with Nigeria is simply and squarely a failure of leadership.” (Thanks Achebe.) Our leaders don’t listen to good advice until they lose power. Obasanjo now regrets that he didn’t achieve true federalism for Nigeria when he had the chance. Jonathan shares the same regret, and wants the recommendations of National Conference 2014 implemented.  The only wise former Nigerian leader is one dead!

Muhammadu Buhari’s government, it seems, has been hijacked by a cabal since his health started deteriorating. As many informed fellows have noted, these unelected gangsters have crashed the economy and spread death and destruction across the land, primarily because they are not accountable to the electorate. Tomorrow, we should demand explanations from these usurpers, especially if Buhari failed to take charge.

The authorities are perhaps afraid that we, like the Roman plebeians in Julius Caesar, could be moved to action if a Mark Anthony persuaded us to see the evils being committed against us.  Well, only the guilty are afraid! I’m convinced, however, that no violent revolution can take place on the Nigerian soil so long as the country remains as it is currently constituted.   But for pervasive ethnicity and the divide-and-rule tactics of the ruling class, hunger and anger would have since sparked a revolution more devastating than the Arab Spring.