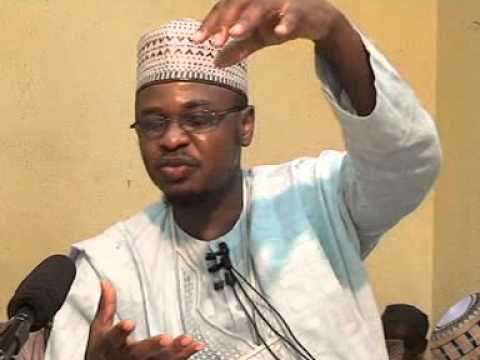 I have read with interest comments of many expressed my recent visit to Anur Jummat Mosque Wuse, Zone 2 Abuja. To those who understood my mission, they also appreciated it and I am grateful because we are partners in peaceful coexistence.

The invitation to Islam by Sheikh Pantami was done in utmost bad faith and not within Islamic traditions. He did not invited me to attend the tafseer, I went on my own, therefore abusing the privilege was quite unfortunate. Prophet Mohammed (peace be upon him) received so many Christian delegations including those from St Catherine’s Monastery in Sinai, but never used their visits to invite them to Islam. Rather, he respected their religion and even granted some of them access to use the mosque for their worship.

I started visiting Muslim ummah during Ramadan about 5 years ago. My mission is simply to enhance better tolerance of each other by practical demonstration of understanding. I have attended tafseer of Sheikh Dahiru Bauchi, where over one million Muslims were in attendance, but he had never ever abused the opportunity of our relationship. In fact, Sheikh Dahiru respects me a lot and I do same to him as father figure too.

The method employed by Sheikh Pantami was cheap black mail because if he sincerely believed in converting me to Islam he should have demonstrated commitments, not to take advantage of my visit. He knew my office or he should have adopted the traditions of the Prophet by writing me a letter of invitation but choosing the part of ambush was to say the least embarrassing but certainly not love at all.

It was not true. He was only invited to revert, and he said, he needs time to think. It was a session that we left with happiness. https://t.co/ubOAz3TeEP

As a cleric, he should have weighed the implications of his actions. While in His sermon he tried to condemn those acts that portrayed Islam in bad light, but he ended up being guilty of abused of obligations to his host. I informed him before hand of my visit, if he was not disposed to it, he could have politely turned it down not to accept then tried to ridicule my reputation.

I have so many mentors who are Muslim leaders including sheikh Lemu, Sheikh Dahiru Bauchi, Sultan of Sokoto, Sheikh Yahaya Jingir, Sheikh Khalid, Maitama Sule, Sani Zangon Daura, Ango Abdullahi, etc. They have never done anything to violate my religious rights. Rather, my relationship with them had strengthened my knowledge of Islam. 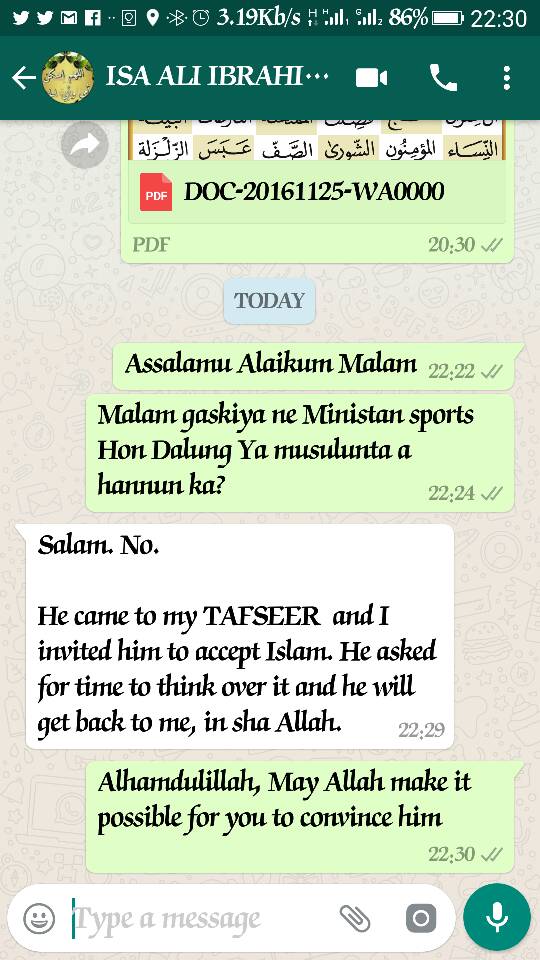 When Sheikh Pantami launched the affront on my faith, I was calmed because it is part of the price I have to pay for peace. Not too long after my departure from Anur Jummat Mosque in Abuja, there was rumour of conversation to Islam which has been trending. In my opinion this has a nexus with the ill fated invitation which primarily was intended to spark off instability.

Let me appeal to all peace loving Christians and Muslims to be calm and disregard machinations of evil minded people who see nothing good in peace. Instead of discouraging me, it has emboldened me to do more for peaceful coexistence and religious tolerance in Nigeria. God is the author of faith and conscience, He act as it pleases Him. He created us different people with different faiths, culture and ethnic backgrounds yet He put us together in one country.

This temptation is a test we must work hard to pass. May God Almighty grants us the grace to do His will, amen. Love you all.

Latest Reaction from the minister:

This update is prompted by numerous calls and messages sent to me by people trying to verify a rumor about the conversion of Hon. Minister of Youth & Sports, Barr. Solomon Dalung to Islam. The story is false in its entirety.

Hon. Minister Dalung remain a practicing Christian just as he remain a very close ally to the Muslim community in a constant effort to build bridges across ethnic and religious fault lines for a better Nigeria. His visit to An Nur Mosque which must have stirred the rumor was a yearly event. He always pick mosques he paid special visits on such occasions to rejoice with the Muslim community and rebuild the fractured relationship between Muslims and Christians.

To those who know him closely, such a gesture is neither new nor a burden to him. His open mindedness has allowed him an excellent grasp of comparative religion while seeing it as a tool to reintroduce cohesion and mutual respect among adherents of the two major religions in Nigeria.

Minister Dalung is an ardent believer in the rights of individuals for free subscription to ideological beliefs of their conviction. That explains why he deals with people on merit rather than ethnic or religious considerations. Perhaps, that’s what makes him one Nigerian that’s at home in every village or hamlet in any part of the country. To Dalung, religion is a matter of personal conviction and a tool for building not destroying humanity.

Maiwada Dammallam
Chief of Staff to the Minister”