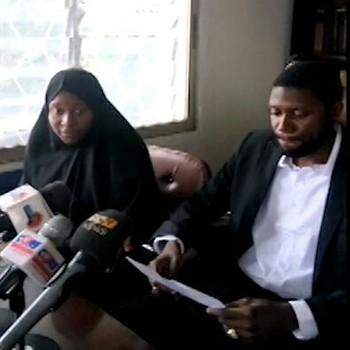 In the name of Allah the Beneficent, the Merciful.

Good evening ladies and gentlemen. It is seven months now since the Nigerian Army launched a coordinated massacre on members of the Islamic Movement in Nigeria under the guardianship of his eminence Sheikh Ibraheem Zakzaky between 12th and 14th of December 2015.

Shaikh Zakzaky and his wife were fatally wounded  while hundreds of innocent citizens were brutally killed, including women and children.

It could be recalled that on July 25, 2014, officers of the Nigerian Army led by Col. S.O Okuh tortured and murdered in cold blood 34 of our brothers and sisters including three sons of Sheikh Zakzaky, Ahmad, Hamid and Mahmud. Now additional three sons of the revered Sheikh, Hammad, Ali Hydar and Humaid were massacred in his presence. This is indeed a display of enormity and gross violation of fundamental human rights of fellow Nigerian Citizens.

As a result of the December 2015 brutal crackdown on innocent citizens of this country, Nigeria by the Nigerian Army:

– Many tertiary institute students were brutally massacred and buried in mass graves while others are still under detention.

– Not less than 472 women became widows.

– 100+ born to widows since the brutal killings.

– 68 of those in prison are students.

– 2 died in prison due to lack of medical attention.

– Residence of Sheikh Zakzaky was burnt down by the Nigerian Army and completely destroyed.

– Islamic Movement Centers were destroyed including the iconic Husainiyya Bakiyyatullah, largest in west Africa and symmetries.

– 347 that included women and children were dumped in a single mass grave in Mando, outskirts of kaduna.

– Over 300 were hospitalized with various degree of injuries.

– Many were burnt to death.

It is a fact that, murder, massacre, unjust imprisonment or detention, rape and torture are all crimes against humanity.

According to the only surviving son of Sheikh Zakzaky, Muhammed Ibraheem Zakzaky whose six brothers were killed in cold blood by the same institution in less that eighteen months, his father, Shaikh Zakzaky currently wearied down into a blind man and  slowly crippled contrary to what the detainers of Shaikh Zakzaky said earlier, the DSS, that he is in a very good condition, and claimed to have spent five million Naira on his health.

We are deeply concerned and worried about the present health condition of our leader Shaikh Zakzaky. Constitutionally, it is mandatory for the Nigerian state and those holding him to release him urgently and unconditionally to enable him seek for proper medical care in any place of his choice. Since he has not committed any crime, he should be freed from this illegal detention, holding him hostage is unconstitutional it is a clear violation of his basic rights and therefore unacceptable.

Finally, we are calling on all Nigerians and the international community to join us and stand for the truth, justice and fairness. Sheikh Zakzaky, his wife and the rest of the one hundred and ninety one (191) innocent citizens should be released immediately and unconditionally.