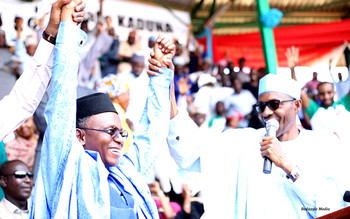 I penned an article this July captioned, “Buhari Condemns Saudi Bombings, Skips #BaghdadBombing.” He never did. It was mostly Shia Muslims who were killed in that “worst single terror blast worldwide” of the year, that happened in Iraq claiming over 300 innocent lives. WashingtonPost had this to say as its caption: “The worst ISIS attack in days is the one the world probably cares least about.”

A month later, PremiumTimes headlined: “Zaria Massacre: After months of silence, Buhari promises “appropriate response.” That was in mid August. It appeared to be a ruse. The Zaria massacre happened in December of 2015, the Zaria judicial report set up on Buhari’s orders by the Kaduna government came out in July. As the “anniversary” of the Zaria massacre and secret burial of over 350 Nigerians and minority Muslims as well as the “anniversary” of the illegal detention of Zeenat Zakzaky comes up, Buhari does not give a fig. Shia Muslim lives obviously don’t matter.

It’s the same with implicated Kaduna governor Nasir el-Rufai. Shia Muslim lives do not matter and like Buhari, nor does keeping his word. In late July the Kaduna governor “set-up” a 9-member panel to write a white paper report on the findings of the judicial panel. He promised this will be out in 2 weeks. Several months later, either the committee never sat or el-Rufai is sitting on their report. The only thing el-Rufai has done is added persecution on the existing persecution with more actions geared against the continued existence of Shia Muslims in Kaduna and inspiring same across the notably Saudi-fed north.

The frightening images of coordinated armed anti-Shia civilian thugs ferried in police vehicles the last two weeks, accompanying el-Rufai’s ban on this religious minority, said it all. The Shia (“Shia” in Quran means “followers,” see Qur’an 37:83) are to be eliminated. This will be a legacy Buhari and his APC “change” regime will forever be remembered for.