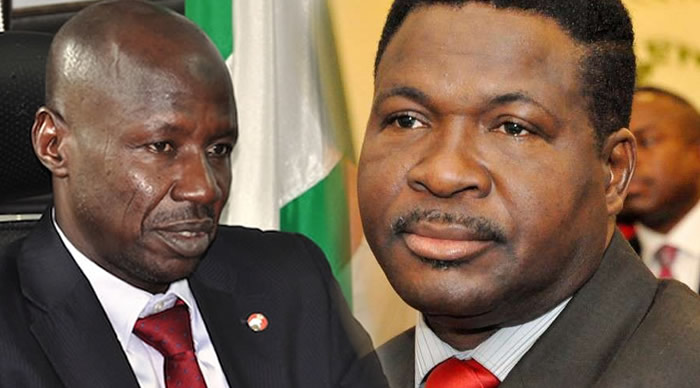 Acting Chairman of the Economic and Financial Crimes Commission, EFCC, Mr. Ibrahim Magu, on Tuesday, clashed with human rights lawyer, Chief Mike Ozekhome, SAN, at an end of year event that was organised by the Federal High Court in Abuja.

Both Magu and Ozekhome were special guests at the occassion that was equally used by the court to recognise and confer merit awards on some of its staff that recently retired from active judicial service.
Trouble started after Magu who was called to the podium to speak during the launch of a book containing selected judgments and rulings of retired Chief Judge of the High Court, Justice Ibrahim Auta, singled out Ozekhome, saying he has a responsibility to join ongoing war against corruption in Nigeria. Magu equally maintained that judges of the Federal High Court who attended the event from various divisions of the court across the federation, have a duty to compliment government’s effort to rid the country of corruption.Before he could drop the microphone, Ozekhome stood and indicated his intention to speak and was invited to the podium.

The constitutional lawyer who has fought and won many legal battles against the EFCC, accused Magu of not being serious and sincere in the anti- corruption war.

Ozekhome challenged Magu to prove him wrong by prosecuting any top official in the present administration, alleging that EFCC was only going after opposition politicians and those criticising the President Muhammadu Buhari led administration.

He said judges should not allow themselves to be intimidated, saying they should not be afraid to do justice at all times without fear or favour.Looking directly at Magu, Ozekhome continued; “I want to assure you that all of us are engaged in fighting corruption, but like I have challenged you again and again before your very face up to March this year when you invited me to the anti-corruption seminar.

“I said Mr. Magu, do us one favour, show us one person in the government, in your government that you docked, let Nigerians see that you are trying this one person!

“Then you would have achieved mileage in the fight against corruption. Just one example! Put a Minister, put the former SGF that has been indicted in the dock, just put one, then we will say you are serious and no longer selective.

“When you are selective in the fight against corruption and yet when you check your right its corruption. You treat the government with Sasorabia perfume and then fight opposition politicians and critics with insecticides, then you can’t be serious.