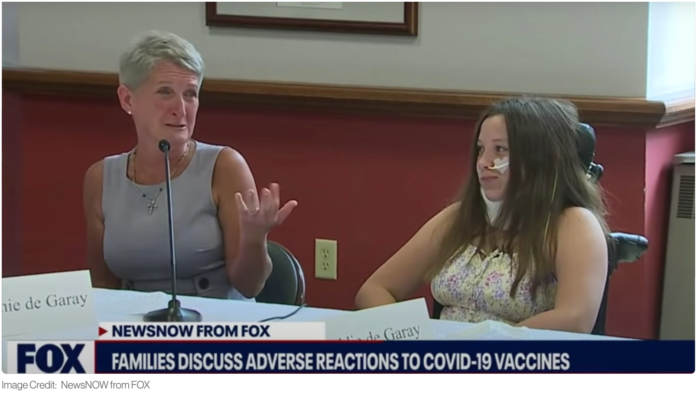 Vaccine-damaged Americans described suffering severe adverse reactions as a result of taking a Covid-19 shot during a press conference in Wisconsin Monday.

All they are asking for is the chance to be seen, heard and believed. They were first in line to get the vaccine, even participating in clinical trials. But now they say the medical community has turned their back on them after adverse reactions.https://t.co/Nq5dn0IdV0

After being part of a Covid vaccine trial for 12-15 year-olds, Maddie has been to the ER 9 times and hospitalized 3 times for a total of 2 months.

Doctors even wanted to put her in a mental hospital saying her symptoms were caused by anxiety. pic.twitter.com/roWxQFMGrK

In January, my life changed drastically.

Immediately after the injection, I felt an odd tingling-type dripping sensation in my arm. I had immediate heart palpitations and a feeling as if I was going to pass out. I’m so sick and my blood pressure reading was so high that I don’t know how I didn’t have a stroke. I cannot quote what it was, but as a hygienist I take blood pressure readings on my patients before I treat them, my adult patients, and it was so high that I was scared in that moment that something was happening to me. I did eventually stabilize. They monitored me for the 15 minutes and then an extra 30 minutes after, and I did stabilize so they went on ahead and sent me home.

When I got home I felt a little, you know, woozy, a little dizzy. The next couple of days I just had a headache and just kind of that feeling of unwell. All of the things that I had signed up for to get the vaccine, but it was three days later that my symptoms increased and accelerated.

I had a sharp stabbing pain in my scapula area that was just this intermittent, like a knife-stabbing pain. I had tingling and numbness throughout my body. It ran down both my arms. I also still had the heart palpitations. I had these internal vibrations, and the only way I can explain the internal vibrations is it feels like you have this little electric shock running through your body, like you’re stuck in a vibrating chair, like glued into it and it never stops. I have tremors in my hands, which has made me leery if I’ll ever be able to practice as a hygienist again. And like Sheryl, I am so fearful that I may have some sort of neurological issue after this with Parkinson’s; they have ruled out MS, but again they have not told me that I have anything. They can tell me what I don’t have. I have swollen lymph nodes, brain fog, I had brain fog so extreme that I would be having a conversation with someone and I would black out, try to come back to that conversation and nothing was there. Swollen lymph nodes, muscle weakness, unexplained skin rashes.

I had convulsions and nighttime seizures. I had to have my six-year-old daughter wake me up from a fit in the middle of the night. No six-year-old should have to do that for their parent. I have also experienced thick clotting, heavy menstrual cycles. I was so afraid that I literally, and I have it with me, I prepared my will and my obituary for my family because I didn’t think that I would wake up to the next day.

My name is Stephanie and this is my daughter Maddie and we live in Ohio.

On January 20th, Maddie received her second dose of the Pfizer Covid vaccine as a participant in the clinical trial for 12 to 15 year olds.

All three of our kids volunteered and we’re excited to participate in the trial as a way to help us all return to normal life. My husband works in the medical field and I have a degree in electrical engineering. We are pro-vaccine and pro-science, which is why we agreed to let Maddie and her two older brothers volunteer for the trial.

Before Maddie got her final dose of the vaccine, she was a healthy 12-year-old who got straight A’s and had lots of friends. She had a life. She was energetic. She was not like this, although she does still have lots of friends. Upon receiving the second shot, Maddie immediately felt pain at the injection site and over the next 24-hours she developed severe abdominal and chest pain, and the way she described the chest pain, and I quote, ‘It feels like my heart is being ripped out through my neck.’ She had painful electrical shocks down her neck and spine that forced her to walk hunched over. She had extreme pain in her fingers and toes; it actually made them turn white and they were cold whenever you touched them. She had edema, so my husband immediately took her to the ER as instructed by the vaccine trial nurse administrator, which is what we were instructed to do. Her blood was taken for a renal profile and tested. She was checked for appendicitis, which she did not have, and given an IV with some medicine, then sent home. However, in the discharge papers from the children’s hospital ER that she went to, the diagnosis stated ‘Adverse effect of vaccine initial encounter.’ This would be the only time that that was written in her medical charts, but it’s in there.

Over the next two and a half months her abdominal muscle and nerve pain became unbearable. She developed additional symptoms that included gastroparesis, nausea and vomiting, erratic blood pressure, and heart rate, memory loss; she mixes up words, brain fog, headaches, dizziness, fainting – she fell and hit her head – and then seizures. She had verbal… she developed verbal and motor tics. She had loss of feeling from the waist down and muscle weakness, drastic changes in her vision, urinary retention, and loss of bladder control, severely irregular and heavy menstrual cycles and eventually she had to have an NG tube put in to get nutrition. All of these symptoms are still here today, some days are worse than others. Our greatest challenge came when her doctors began to consider an alternative diagnosis… well she really didn’t have one before so it was the first one. So, like everybody else she had lots of tests, but not nearly as many tests as everybody else, and she’s a child. Why didn’t they do all those tests on her? Sorry… So because they couldn’t figure it out one physician labeled her as having ‘functional neurologic disorder,’ saying it was due to anxiety. This concerned us, and we didn’t agree with it because she doesn’t have anxiety. Look at her. I mean what 13-year-old can sit here calmly if they have anxiety or mental issues? At one point they even tried to admit her to a mental hospital. So we did seek additional medical opinions some of which came from this group.

In June, we connected her neurologist with another doctor that’s doing research on adverse reactions like Maddie’s. She was finally provided, but they finally gave her an MRI of her brain, an MRV and a bunch of additional blood tests. It took five months to get that done. Over the past five months Maddie has been into the ER nine times and has been hospitalized three times for a total of two months in the hospital.

What I want to ask, Maddie volunteered for the Pfizer trial, why aren’t they researching her to figure out why this happened so other people don’t have to go through this? Instead they’re just saying it’s mental. If anybody’s mental, it’s me. So today our journey as parents to help our daughter Maddie continues. All we want is for Maddie to be seen heard and believed, because she has not been and we want her to get the care she desperately needs so that she can go back to normal. Why is she not back to normal? She was totally fine before this. She did the right thing trying to help everybody else and they’re not helping her.