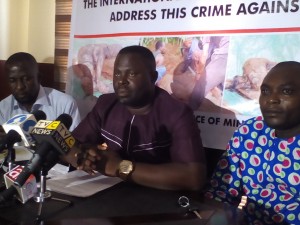 The same new mushroom propaganda government-linked group, “Conference of Minority Tribes”, that was well sponsored with free global mainstream media space to promote a most notorious message that Shiites were behind the Fulani herder terror of Agatu in mid March is at it again.

This time the group has been paid to put petrol on the discounted claim by the DSS that IPOB “elements” killed and buried five Fulani men in Abia state.

The so-called group led by a so-called Samson Babalola this time after being led by “Okpokwu Ogenyi” in March, made strabismic statements/threats that it will carry IPOB to the International Criminal court, ICC for the murder of the Fulani men. The governor of Abia state has however expressed anger at the false and instigating statement of the DSS on the matter; revealing that among the bodies found in the shallow graves were Igbos. The grave site was apparently a kidnapper and miscreant burial ground and not linked to IPOB.