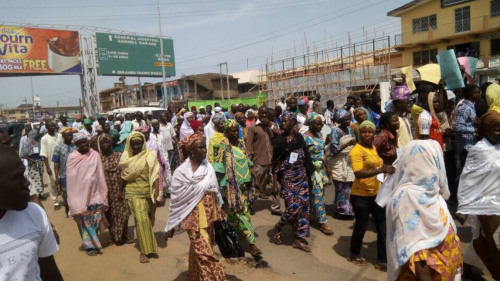 Kwara Must Change brings you greetings from your humble children and
the entire members of the Ilorin community. We pray that the almighty
Allah will preserve you in good health and shower you with abundant
blessings and rahma.

Dear Baloguns and other high chiefs in Ilorin, it has been brought to
our attention that you have been gifted with luxurious vehicles by the
Senate President Bukola Saraki, in an effort to entice, deceive and
further the exploitation of us your children. We are also aware that
the essence of this gift is to convince you once again, to dance to
the tune of the destructive interest of the person who brought Kwara
down to its knees and made its people paupers.

Eyin babawa, for many years now, you have endured so much pain and
discomfort from seeing your children suffer un-ending hardship and
lack. You have lamented in secret and cried in hidden. Many of your
young children are without jobs, and even those with jobs are not any
better. Their salaries are not paid and even when paid, their take
home pay is insufficient to meet their basic responsibilities, hence
their reliance on you, their parents for family maintenance at grave
discomfort.

After spending so much to train your children, after serving the
interest of these same establishment for decades, at a time when you
should be reaping the fruit of your labor, you are still saddled with
the burden of providing the basic needs of your children. Obviously,
this is not what you bargained for and you have been praying for
Allah’s intervention.
Dear chiefs, if you, the highly placed in ilorin can be confronted
with this kind of hard life despite your relative wealth and
influence, you can imagine how bad the situation would be for many
less fortunate families, parents and young people. Many wealthy
persons of the past had become poor, givers now turn beggars.

This is what has led to anger, depression, confusion and outright
rebellion by the youths in Ilorin and the entire Kwara State. It was
reasoned that, if Ilorin, the state capital is this affected with self
centered and bad leadership, the situation in other parts of the state
may never be imagined.
Considering the mess we now found ourselves, the youths have come to
the conclusive realization that, unless this destructive leadership is
chased out and its oppressive establishment dismantled, nothing else
will change for good. The result of this decision by the youths is the
anger shown at the recently concluded local government election that
was glaringly won by the opposition, yet rigged by the ruling
government.

However, the fear of failure and realization that another election,
which is difficult to rig is on its way, is what has prompted the
leader of the status to embark on this Greek gift to you the Baloguns
and others high chiefs and we must alert you to be careful.

You must not rejoice for receiving these gift sirs. It’s not a gift in
the real sense, it is a Greek gift. The story of the Trojan horse is a
legend in its own sense and I’m sure most of you must have heard of
it. If you haven’t, it is about how the Greeks managed to invade the
city of Troy by gifting a large, wooden horse, the Trojan horse, and
hid a carefully selected force of men inside, who sneaked out during
the night and did their evil task stealthily.

It must be stated here that, it can lead to dire consequences at times
if we aren’t careful of whom we receive gift from. True, there are
certain people who genuinely have our good at heart but then, there
are many more that are looking for material gains or to fulfill their
ulterior motives. Whenever you are at the receiving end of such
kindness, always be cautious. It’s not that you should view every
person who does well to you with suspicion. But you must learn to
always trust your gut feeling; it’s rarely wrong. If it feels odd for
a certain person to suddenly behave so well towards you or to be
strangely nice and sweet, keep your senses open and your guard up
because it just might have another reason behind it. In this case, we
can say authoritatively that, the vehicles given to the Baloguns and
other high chiefs in ilorin is a gift from the devil and gege bi eyin
babawa se mon so, ‘’Esu o kin fun ni ni adie, ko ma gba odin din omo
lowo eni’’. So, this gift is more like a Greek gift, given with the
intention of tricking and causing harm to the recipient, but in this
case, not just to the recipient, but the entire members of the
community and state at large’’.

We therefore congratulate the Baloguns and other high chiefs for
receiving this Greek gift from the same person who have starved the
entire community to death over the years and deprived the people of
what rightfully belongs to them, only to return to gift cars to few
other people. It is clear here that, some one who denied your children
and the entire community of what rightfully belongs to them cannot
turn around to give the parents gifts. Someone who channels public
resources into personal use at the detriment of the people cannot
suddenly turn around to become father Christmas.