The governor publicly admitted that he sent emissaries to give money from Nigeria’s treasury to Fulani insurgents who had taken to brazen and brutal terror, mass massacring mostly Christian communities in South Kaduna in retaliation for alleged deaths of their members and cows.

“So many of these people were killed, cattle lost and they organised themselves and came back to revenge. …There are one or two that asked for monetary compensation. They said they have forgiven the death of human beings, but want compensation for cattle. We said no problem, and we paid some.”

The state governor Nasir Ahmad el–Rufai admitted to knowing these terrorists involved in wanton acts of incendiarism and murder with the resulting loss of property worth billions and lives of innocent Nigerians.

Nigeria’s anti-terror bill as amended is implicit in the implication of aiding and abetting and concealing terror and terrorists and the bill declares arrest of such persons and recommends life imprisonment or the death penalty for those who act in aid of terrorists.

The Terrorism (Prevention) Act 2011 and Amendment Bill of 2012 with amendments to Section 17 states;

“Any person who does, attempts to do, threatens to do, promotes, assist or facilitates terrorism in any way or manner, or participates in terrorism financing, commits an offence and is liable on conviction to life imprisonment or to a fine of not less than N150Million or to both the term of imprisonment and the fine.

“Arranging and supporting terrorist meetings, harboring terrorists, obstructing terrorist investigations, being declared an international terrorist group or individual or failing to report terrorist financial transactions are offences which on conviction carry terms of imprisonment of not less than 3 years and not more than 20 years.”

Governor Nasir el–Rufai by self admission is guilty of the above violations of Nigeria’s anti-terror act.

Possibly fearing that he will be exposed for having been in touch with the terrorists and giving them money, the governor made an after the event public announcement of his sinister actions.

It must be stated clearly that according to Nigeria’s constitution and anti-terror bill, an amnesty for terrorism can only be declared by the Federal government and must be approved by congress.

Nigeria’s anti-terror bill, “Terrorism Prevention Act of 2011 as amended in 2013, Part 1, subsection” clearly states that “(2) without prejudice to sub-section (2) of this section, where death results from any terrorist act, the penalty shall be death sentence.”

No Nigerian, civilian or state administrator can singularly forgive and pay off terrorists without Assembly approval.

We therefore call for the immediate declaration of a state of emergency in Kaduna and the arrest and prosecution of the Kaduna state administrator and all those implicated in this act above the law and in violation of Nigeria’s security.

All other possible ties of governor Nasir el–Rufai with terror organisations in Nigeria including Boko Haram must be promptly investigated. Did the governor also order financial compensation to Boko Haram terrorists to stop them from attacking Kaduna state after the July 2015 market place bomb detonation? Reports of northern governors paying off Boko Haram terrorists were commonplace during the Goodluck Jonathan past administration. These funds used to pay terrorists to divert them from the governors’ states are the reason why Boko Haram was able to acquire its arsenal and inflict severe damage on the northeast.

While the past reports of northern governor paying off terrorists must also be investigated, this current payment by the Kaduna state government to terrorists deserves top priority. For how long has Nasir el–Rufai maintained such relationships with perpetrators of terror in Nigeria? The Buhari administration must take this infraction as seriously as it is, recognizing all implications of aiding and abetting known terrorists guilty of deadly crimes against humanity.

Nigeria must also know exactly how much money was paid out to these terrorists and who and where they were paid.

Apparently as presents from a tweet the governor made in 2012, there is a “Fulani constitution” the governor claims exists and to be betrothed to which he abides by over the Nigerian constitution he swore to, in execution of his administrative actions.“We will write this for all to read. Anyone, soldier or not that kills the Fulani takes a loan repayable one day no matter how long it takes.” – Nasir Ahmad el–Rufai @ElRufai. 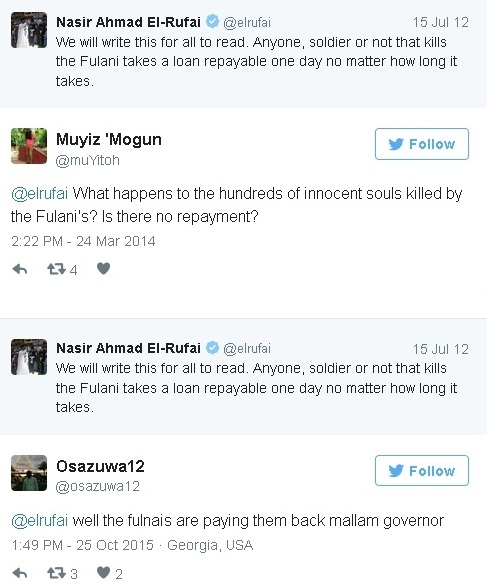 While the victims in cities across Nigeria are not regarded and compensated, the governor places priority in paying off self-admitted terrorists.

Such an administrator is clearly not fit to remain at the helm of affairs in a polar democratic Nigeria.

There is need for urgency of action by the Buhari government as Governor Nasir el–Rufai poses a serious danger to himself, Kaduna state and Nigeria as a whole.

A state of Emergency must be declared in Kaduna immediately and/or any means of invoking Nigeria’s laws to protect its citizens must get the governor off the mantle and investigated and repudiated for concealing and sponsoring terrorists.