According to Stephen Davies, an Australian cleric hired by President Goodluck Jonathan to serve as a hostage negotiator, between FG and Boko Haram has disclosed that not all the over 200 abducted Chibok school girls are still in Sambisa forest, as a good number of them are hungry, sick, and have also broken their bones. “One of that small group of girls is ill and we had hoped we might convince the commander of the group holding her that she should be released so we could give her medical treatment.

There are other girls who are not well and we have come close to having them released but their captors fear a trap in which they will be captured in the handover process.

One girl has what I assume is a broken wrist as they demonstrate to me how she holds her hand. I have been told that others are sick and in need of medical attention.

But I am encouraged by the progress. Every day there is the possibility of the release of the girls.

This is painful for the parents and the nation. The well-being of the girls is constantly on our minds and we want to see their release as soon as possible,” he said.

Davis has ruled out the possibility of the girls being rescued, Punch reports. According to him, the girls are not in one location, but are scattered in groups in several camps across the Nigerian border in Chad, Niger and Cameroon. He explained that to try to rescue one group would endanger the lives of the others.

In addition to working on the Chibok case, Davis has worked with Nigeria previously. He was reportedly responsible for brokering a truce between the Federal Government and Niger Delta militants in 2004. 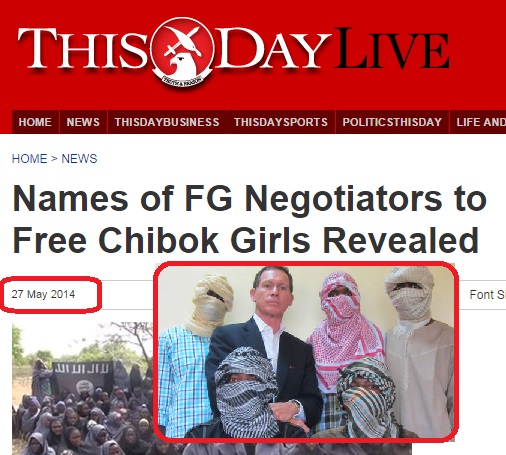