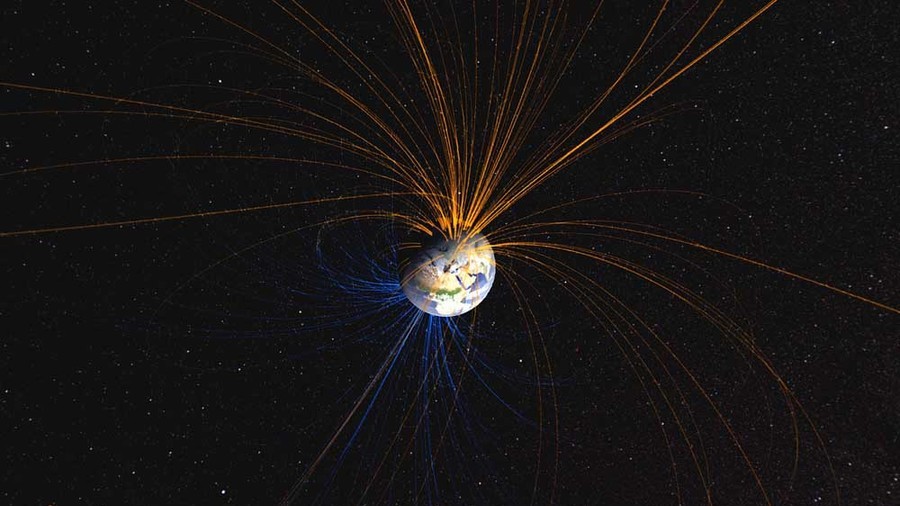 There is a prediction in Islam that towards the end of the world “the Sun will rise in the west.”

Well the below article appears to present a path for this occurrence.

Earth’s magnetic field is decaying at such a rapid rate that scientists think the poles may flip. New research shows the most significant weakening is happening under Africa, in an area called the ‘South Atlantic Anomaly.’

As well as giving us our north and south poles, the magnetic field blankets the Earth, protecting it from solar winds and cosmic radiation. Without it there would likely be no life on our planet today. However, the forcefield has weakened significantly in the past 160 years and scientists have suggested that it could be in the process of flipping. Effectively this means a switch in magnetic polarity and would see compasses point south instead of north.

Strangely, this has actually happened several times in the history of the planet, occurring roughly every 200,000 to 300,000 years. Approximately 40,000 years ago, it attempted to switch before snapping back into place. This NASA illustration captures the enormous disruption to the fields during a reversal:

The birthplace of pole reversals

The South Atlantic Anomaly (SAA), which stretches from Zimbabwe all the way to Chile, is of particular interest to scientists because of its dramatic weakening over the last 160 years. The field is now so weak that it’s hazardous for satellites to enter that region.

It’s thought that the SAA might be a harbinger of an impending pole reversal but very little hard data on reversals exists. However, a new study from the University of Rochester, published in Geophysical Research Letters, has shed light on the alarming phenomenon.

To put the recent changes into context, the researchers gathered data from sites in southern Africa and compiled a record of Earth’s magnetic field strength over many centuries. The researchers gathered their data from ancient African clay remnants dating back to the early and late Iron Ages. These artefacts allowed them to study past magnetic fields using “archaeomagnetism.”

An asteroid bigger than the Golden Gate Bridge is careering toward Earth at breakneck speed. What’s even more alarming is that experts admit it’s “potentially hazardous” to our world.

They discovered that the magnetic field in the region fluctuated several times in the past 1600 years. This leads them to believe that the SAA is the most recent display of a recurring phenomenon in Earth’s core beneath Africa that then affects the entire globe.

“We’re getting stronger evidence that there’s something unusual about the core-mantle boundary under Africa that could be having an important impact on the global magnetic field,” Tarduno concluded.

Lead author Vincent Hare added that their data does not necessarily predict a complete pole reversal. “We now know this unusual behavior has occurred at least a couple of times before the past 160 years, and is part of a bigger long-term pattern,” he said. “However, it’s simply too early to say for certain whether this behavior will lead to a full pole reversal.”