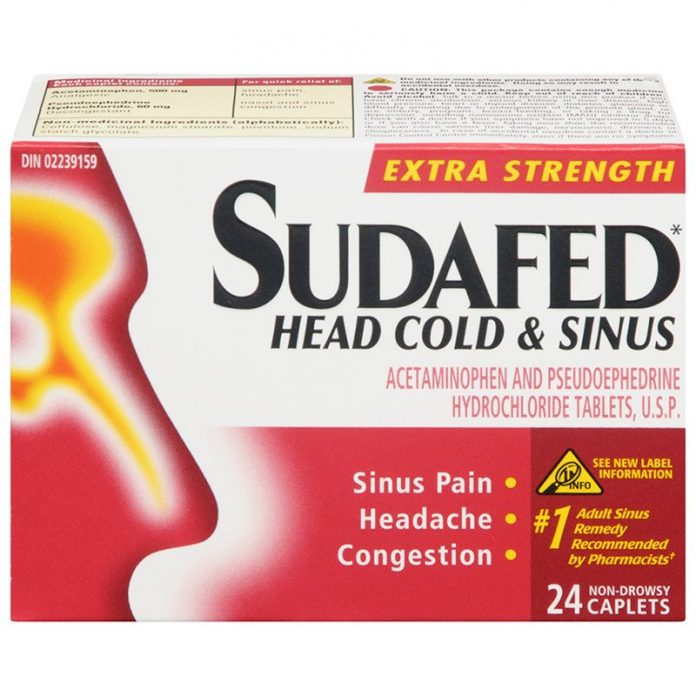 A recent study in PubMed, Pytotherapy Research journal found that Pseudoephedrine, the over the counter chemical in cold medications, may block SARS Covid from binding to cells and causing sickness.

While as the Covid-19 infection progresses, in some it causes disregulation of blood pressure and other vascular problems that drugs like pseudoephedrine may complicate, a primary goal in combatting Covid is stopping the virus from entering the cells during its replication phase (the Covid virus replicates within the first 10 days then dies leaving dead viral debris that cause the next phase) and reducing inflammation. These two areas are where the study found pseudoephedrine effective.

The study found “blocking activities of the screened compounds against the interaction between SARS-CoV-2 S-RBD and angiotensin-converting enzyme 2 (ACE2).” It also found an antiinflamatory role of the drug.

Future studies may confirm the value of these over the counter congestion medications if taken early in managing covid therapeutically. While studies and physicians have recommended Ivermectin taken early, and monoclonal antibodies as of value in managing Covid, and another suggested Thiamine (vitamin B1) had up to 80% benefit value in admitted patients, the study announced its findings on the wider and sad premise that “there is still no specific medicine against the virus.”

The coronavirus disease 2019 has infected over 150 million people worldwide and led to over 3 million deaths. Severe acute respiratory syndrome (SARS)-CoV-2 lineages B.1.1.7, B.1.617, B.1.351, and P.1 were reported to have higher infection rates than that of wild one. These mutations were noticed to happen in the receptor-binding domain of spike protein (S-RBD), especially mutations N501Y, E484Q, E484K, K417N, K417T, and L452R. Currently, there is still no specific medicine against the virus; moreover, cytokine storm is also a dangerous factor for severe infected patients. In this study, potential S-RBD-targeted active monomers from traditional Chinese medicine Ephedra sinica Stapf (ephedra) were discovered by virtual screening. NanoBiT assay was performed to confirm blocking activities of the screened compounds against the interaction between SARS-CoV-2 S-RBD and angiotensin-converting enzyme 2 (ACE2). We further analyzed the blocking effect of the active compounds on the interactions of mutated S-RBD and ACE2 by computational studies. Moreover, antiinflammatory activities were evaluated using qRT-PCR, enzyme-linked immune sorbent assay, and Western blot analysis. As a result, pseudoephedrine (MHJ-17) and its derivative (MHJ-11) were found as efficient inhibitors disrupting the interactions between ACE2 and both wild and mutated S-RBDs. In addition, they also have antiinflammatory activities, which can be potential drug candidates or lead compounds for further study.

Related: “According to Hopkins, other over-the-counter medicines that can help alleviate symptoms include cough expectorants like Mucinex or the generic version for the ingredient guaifenesin, cough suppressants like dextromethorphan or Robitussin, and decongestants like Sudafed or pseudoephedrine—though anyone with high blood pressure, glaucoma, or thyroid conditions should avoid decongestants.”