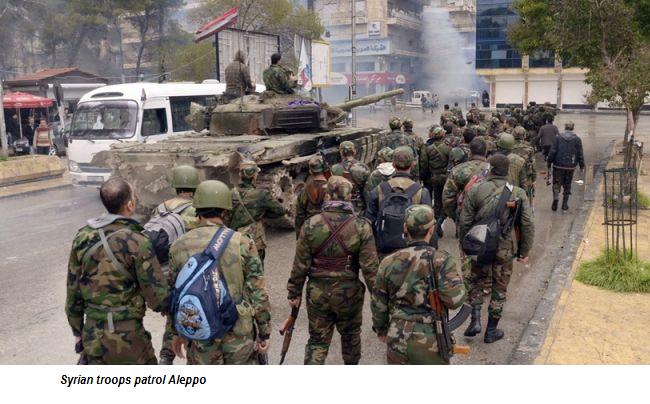 The Syrian army continues its mop-up operations against foreign-backed militant groups across the country.

Syrian forces stormed militant posts in the northwestern province of Aleppo on Friday. Scores of armed men were killed and heavy weaponry was destroyed by the army.

The army also inflicted heavy losses on the militants in the neighboring province of Idlib.

Elsewhere in the central province of Homs, Syrian troops foiled attempts by armed men to take over Syrian military checkpoints.

In a similar move by the army, Syrian forces foiled an attempt by a terrorist group to infiltrate into Syria through the port city of Latakia. Syrian soldiers killed nearly 20 militants including a commander of the al-Nusra Front terrorist group.

Syrian troops had earlier made remarkable gains in the strategic town of Yabroud on the outskirts of the capital, Damascus. The army backed by the Lebanese resistance movement, Hezbollah, drove out militants from the town, which is located in the strategic region of Qalamoun.

In addition, the Syrian army has managed to regain full control of the famous medieval castle of Qal’at al-Hisn and its surrounding areas near the western city of Homs.

Since turmoil erupted in Syria three years ago, some 130,000 people have died and millions of others have been displaced. The United Nations says the number of Syrian asylum seekers in developed countries doubled in 2013.