15 days ago the omens were for a Trump victory, Synagogue’s prophet T. B. Joshua said. 10 days ago it changed, a woman would take the lead, narrowly! He continued. “With a narrow win,” he stressed three times. “It will come down to two states,” he continued. “I really respect Donald Trump,” he went on, to roars of approval from the crowds. “He deserves an award.” T. B. Joshua was clearly and carefully describing a changing predictive climate.

While Donald Trump won the electoral college and elections, Hillary Rodham Clinton won the US elections popular vote. And she won narrowly.

Very few predicted a narrow victory. Virtually none of the technologically advanced western poll systems predicted such a close election. The New York Times forecast machine predicted a Hillary likelihood of 80% as against Trump’s 20. Polls all gave her a sweeping victory. 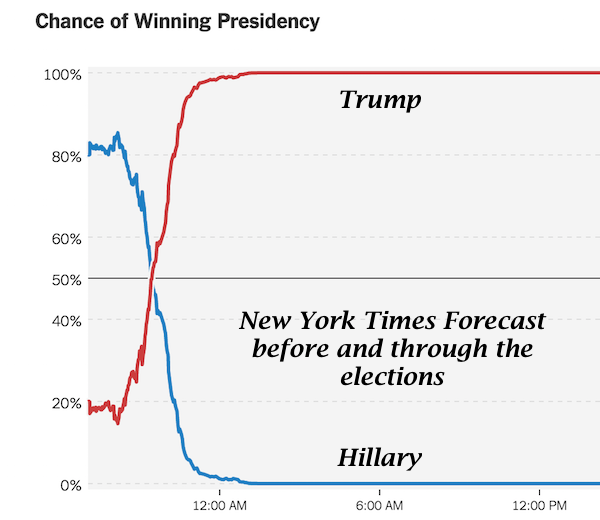 While of course, in categorical terms T. B. Joshua’s absolute “winner” result prediction was wrong, his prediction on a narrow margin win for Hillary was correct. If his “vision” was interpreted as Nigerian elections based on popular vote are, it is seen immediately how he read whatever he saw in raw numbers as a victory for Hillary. “Observer bias” is the scientific word for this problem.

Again, T. B. Joshua broke down the win to two main states. Analysts consider Trump’s last minute campaign in Wisconsin and his wife being sent to do same in Pennsylvania as the two states where the impossible or unlikely happened that ultimately led to Trump’s victory.

Again, by describing changes in the prediction messages over time, T. B. Joshua unarguably left room for future changes, at the 5-day mark and at future dates. That this was a challenging dynamic and not static prediction exercise, was the apparent message. “It was clear, that was 10 days ago, that is why I say, ‘I saw.'”

Again, T. B. Joshua described that there will be turbulence and attempts to pass a vote of no confidence on the president. “The new President’s boat will be rocked.” This appears to be coming to pass by all means.

Additionally, the pastor said 15 days ago he saw a man winning. At that time, no one predicted a Trump victory. This statement is piquing.

It is quite disappointing that several commentators including scientists like Ijabla Raymond who should know the nuances and dichotomy of science which never measures in absolute terms, does not recognize that from a scientific point T. B. Joshua’s prediction had a statistic significance as high as 90%. There is no all or none in science. The degree of value/correlation is measured as the null hypothesis (no significance measure) is rejected.

People like Dr. Ijabla are using non scientific methods, “babalawo” methods to discredit and push their allegedly science-embracing/belief arguments. To push their humanist agenda, these people attempt to force a zero-sum game on the readers; whereas many and indeed possibly most situations in nature are not zero-sum.

Some religions say that while prophets are able to see – with the aid of Jinns – into lower Heavens knowledge realms, they are unable to penetrate deeper and thus do get some things right but not all.

“Verily, We have adorned the lowest heaven with the adornment of stars; and [We have placed] a formidable protection from every obstinate devil. They cannot listen to the Highest Realm, and they are pelted from every side. Outcast!—and theirs is a perpetual torment—Except for one who quickly snatches away [some information], after which he is pursued by a fiery flame.” (Quran 37:6-10, also Quran 15:18)

So we can conclude that T. B. Joshua’s noted or seeming failures in his prediction reinforce this religious position and religion as a whole. Furthermore it is most important to note that a proper analysis or criticism of T. B. Joshua’s prediction and other religious instruments may only objectively be done from a religious review and not by scientific methods which rather confer greater statistical and scientific relevance to religious prophesies.

R Kelly, 54, found GUILTY of all nine counts of racketeering and sex trafficking: Singer faces rest of his life behind bars for recruiting...