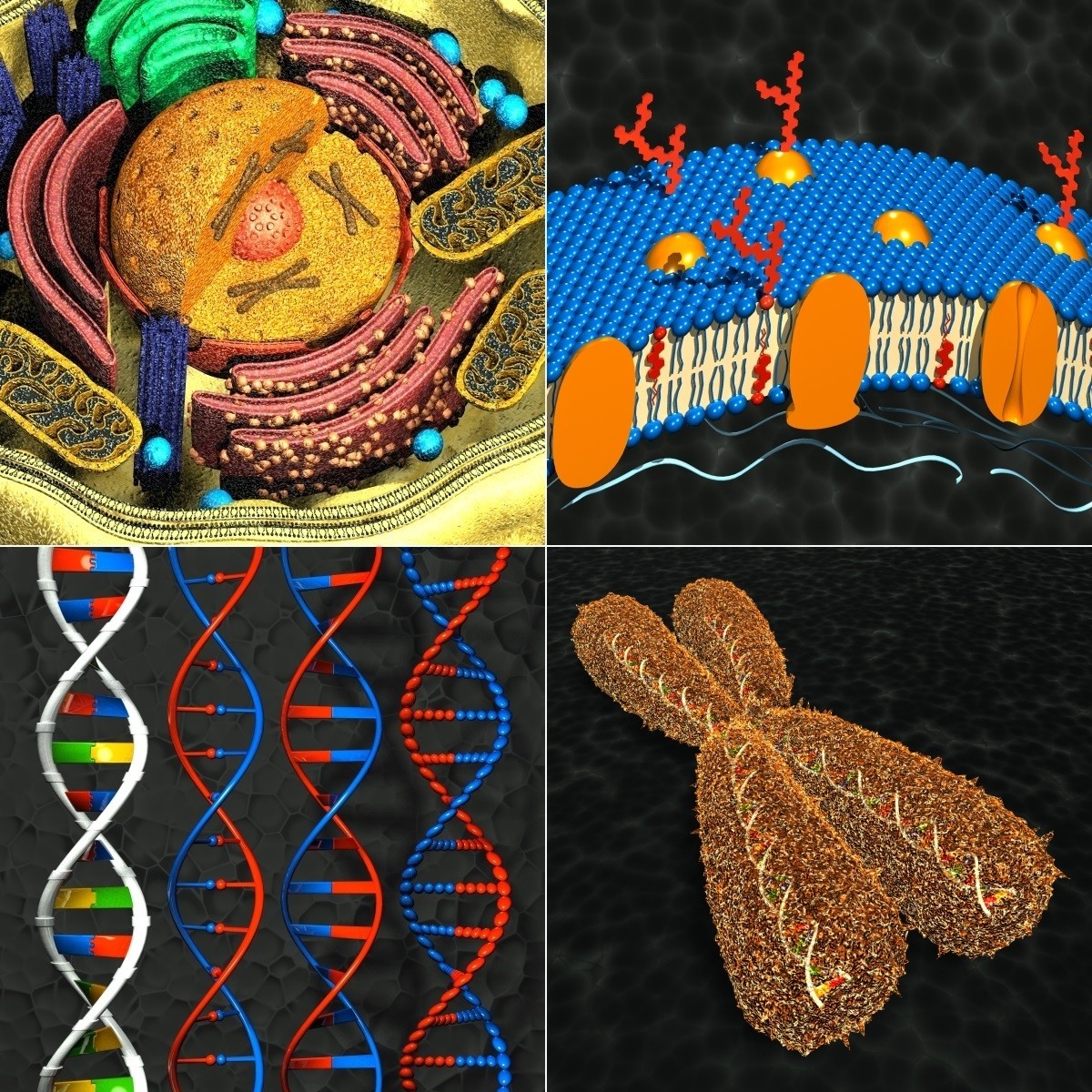 The Discovery Science TV channel presented space as the source of organic molecules, and featured the assertion that life might have  originated on other planets. In this article, we will focus on the fact that the existence of the chemicals in question does not point to life, and we will lay bare another distortion for the sake of evolution, which is far from explaining the origin of life.

What Does the Discovery of Sugar-like Chemicals in Space Signify?

Chemical substances can form anywhere in the universe. Particularly large stars and nebulae are special high-energy environments where heavy metals can form.  Space is also home to dust and gas clouds and these gases act as reaction mediums in which various chemical compounds form, and atoms make compounds. Evolutionists attempt to use this fact for their ‘life from space’ claims.

High-energy stars and nebulae are natural sources of molecules used in living things and the transportation of these molecules to earth via meteors is a natural process. When the Murchison meteorite, which fell to Earth in Australia in 1969 was analyzed, many chemicals were detected.  Simple sugar-like chemicals were also found among these. However, these chemicals, which are labeled as ‘polyols’, do not imply the existence of living organisms.  Polyol chemicals, although named ‘sugar alcohols’, do not contain sugar or alcohol as we know them.

Dr. George Cooper and his colleagues, who  conducted analyses on the Murchison meteorite, also stumbled upon dihydroxyacetone, a small sugar molecule, along with glycerol, also known as the fat molecule.1 However, it is impossible to claim that the existence of these molecules indicates living organisms  because in 1861, Alexander Butlerov showed that these simple molecules could be synthesized inorganically from formaldehyde.2

The existence of formaldehyde clouds in the interplanetary space is an astronomical fact. With a mechanism called the formose reaction, when the molecular gas clouds composed of high-energy formaldehyde in the space are catalyzed with a base and metal atom, the reaction can produce the said sugar-like molecules.

Formaldehyde, which when alone is poisonous for living beings, is not a source of life. Although presented as an organic molecule, formaldehyde is actually a toxic chemical that results when carbon-monoxide ices found in space enter into reaction with hydrogen atoms.

Breslow also showed in 1959 the detailed steps of the formose reaction.  According to this, the by-products of this chain reaction are glycolaldehyde, glyceraldehyde, dihydroxyacetone, and tetrose sugars.3

The formose reaction begins with 2 formaldehyde molecules condensing to form Glycolaldehyde (1), which then produces Glyceraldehyde through the aldol reaction (2). An aldose-ketose isomerization forms 2 Dihydroxyacetone (3) which will then react with the 1st step to form Ribulose (4), and through another isomerization forms Ribose (5). The molecule 3 reacts again with formaldehyde to form Tetrulose (6) and then Aldol-tetrose (7).

As is seen, these molecules are inorganic, i.e. inanimate compounds and emerge in inanimate conditions, as a result of the electron exchange between molecules. These also include ribose sugar, which cannot be interpreted as ‘RNA came from space’ just because ribose also exists in the structure of the RNA of living beings.

Of course, other stars and galaxies are sources of many chemicals found on earth.  However, unlike other celestial bodies, our planet is a unique place where these inanimate molecules spring to life inside living organisms.

What Does the Discovery of Amino Acids on a Meteorite Signify?

The Murchison meteorite led to another interesting discovery.  Various amino acids were also found in this meteorite  but this should not come as a surprise, because the amino acids the meteorite contains are the same as the amino acids that can be obtained in vitro through reaction of inorganic molecules. All the chemicals that can be produced by supplying electrical current to Methane, Nitrogen, Water and Ammonia molecules in a special closed vacuum environment are likewise present in this meteorite as well. However, the amino acid mixture obtained in both the meteorite and a laboratory is a racemic mixture, consisting of equal amounts of left- and right-handed amino acids.4Since the structure of living beings requires only left-handed amino acids, it is impossible for the said amino acids to be used by living organisms.

Moreover, and most importantly, the presence of amino acids alone is in no way an indication of life. Amino acids are merely the building blocks of the nano-machines that are proteins.  In living organisms, these amino acids are also selected among themselves.  The amino acids used in protein construction must always be left-handed.  There is absolutely no place for right-handed amino acids in living organisms: In this sense, protein construction is a process that has no room for error. Today, the fact that all amino acids used in proteins are only left-handed still remains an extremely fine atomic detail, the reason of which is yet to be fully understood. However, the production of a protein depends on the presence of a hundred different proteins. Without the help of these proteins, it is impossible for amino acids to come together and form proteins. For protein production, the code in the DNA and the presence of ribosome, which is essentially a factory, are required.  The ribosome is already largely composed of protein and RNA. Therefore, the fact that the factory that generates proteins is also composed of proteins completely shatters the meteorite theory proposed by the Darwinists. During the protein production in the ribosome, amino acids are picked in a specific order determined by genetic codes and are linked together. Therefore, it is impossible to talk about life without a perfect and complete cell with its DNA, proteins and all organelles.

Even if one assumes that an amino acid molecule has come to earth via a meteorite, this molecule will simply disappear by binding to the surrounding sugar molecules and free radicals that are highly destructive.

The Claim of a “Proto-Cell” that Came Before Cell

Evolutionists are also aware that the peptide bonds that link amino acids should not be exposed to ultraviolet rays coming from the Sun. For this, Darwinists wish to believe that the imaginary ‘first cell’ formed in an environment  sufficiently sheltered from the Sun, yet containing the right amount of energy. Therefore, they believe that the geothermal hot water sources in the depths of the ocean constitute a suitable environment. Another narrative describes geothermal rock pools on the surface that had been somehow sheltered from the Sun and provided a suitable environment for the cells. According to this fiction, ‘independent fat molecules‘ came together to form bubbles, thus making up the first ‘proto-cells’.

But there is a very fundamental fact that is forgotten – or intentionally omitted. The source of fat molecules is only – and always – a living cell.  Fat cannot come into being in nature by itself; it can only be produced by proteins in a living cell. Phospholipids that make up the cell membrane are produced by the cytosol organelle bound to endoplasmic reticulum, all inside a living cell. Further, dozens of special proteins are required for its production. Some of these are GPAT and LPAAT acyl-transferases, phosphatase, choline phosphotransferase, flippase and floppase. The source of the fat molecules on Earth had been first the algae, then the land plants. Therefore, it would be completely wrong to show fat molecules as simple, inorganic chemicals. As can be seen, for the fat molecules to be produced, proteins and the cell of an organism where proteins can operate, need to exist first.

The Claim that Life Came from Outer Space

As the imaginary evolutionary mechanisms are refuted one by one, the evolutionists look for a solution in remote places, i.e., in space. The statement “life first began in space” is a new deception evolutionists resort to, after the lie “life began on earth on its own” was scientifically refuted.  This explanation is based neither on evidence nor on any scientific finding.  According to this claim, which Darwinists call “Panspermia,” the first cells came from the outer space, and that meteorites called “alien hitchhikers” bombarded the Earth’s surface with these organisms.  Again, according to this tale, life began on Mars first, then a powerful impact on the surface of Mars blasted away  rocks full of bacteria into space, and those rocks, in turn, carried life in forms of meteorites to Earth!

We have explained under the previous heading that the tale ‘life was brought to earth via meteorites’ held no scientific merit. Beyond this, there are other scientific answers and explanations we expect from Darwinists. We expect evolutionists to prove, with evidence, through what mechanism inanimate chemicals came to life, wherever they claim it happened in the universe. However, a scientific explanation for this has yet to be made; it is impossible for it to be made anyway. Such fictional explanations only attest to the imagination of the evolutionists. These unscientific claims, which are supposed to be based on observations and experiments, are merely an attempt to buy  time for the evolutionists and keep the theory of evolution  alive, despite its being on the brink of collapse. These are nothing more than entertaining scenarios.

The final chapter of the documentary features the following confession:

‘We do not know how life first appeared on Mars, so the first question remains unanswered.  How did life begin? We currently do not know whether life came from space, or began in the depths of the world’s oceans.’

Life originates only from life. Inanimate matter, on its own, cannot come together and give rise to a living cell even if it takes millions of years. But the Earth is a planet where these chemical compounds were bestowed life.  Life comes into being by the creation of Almighty God, the All-Powerful, Who animates and directs those atoms and molecules.  As long as Darwinists refuse to see this fact, they will continue to constantly humiliate themselves with such humorous explanations.

Our Lord informs in His verses:

Praise belongs to God Who created the heavens and the earth and appointed darkness and light. Then those who are unbelievers make others equal to their Lord! It is He who created you from clay and then decreed a fixed term, and another fixed term is specified with Him. Yet you still have doubts! (Surah al-An’am, 1-2)