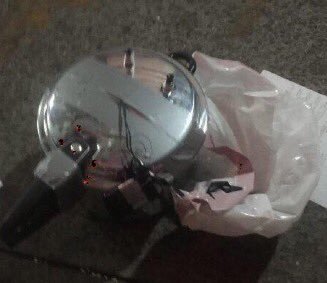 An explosion rocked the Chelsea area of downtown News York Saturday Night at around 8.30 pm.

29 people in the proximity were injured with one critical. The device was “intentionally” placed in or near a metal dumpster which was torn and twisted by the loud explosion. The explosion blasted out the lower windows of a 14-story residence for the blind. The bomb exploded near the corner of 6th avenue and 23rd street.

Video appears to show the #ChelseaExplosion that injured at least 29 _ here’s what we know https://t.co/XgGe15uU3j pic.twitter.com/plF5cy2hs2

Another device, a pressure cooker pot with tape and wires was found at 27th street a few blocks away. The pot was spotted in a garbage bag.

Another possibly unrelated pipe bomb exploded in New Jersey, without any injuries on the same day. The explosion was near a Marine corps race.

Please be advised of this update regarding the incident in Chelsea, NYC pic.twitter.com/Ux5dfBsj72

In Minnesota the same day a suspect reportedly stabbed at least 8 victims. The suspect who was shot and killed reportedly made reference to “Allah” and possibly asked a a candidate if he was Muslim.

The current attacks happen as Russia convened an emergency UN session over the US coalition bombing and killing at least 60 Syrian troops and in the process, allowing ISIS terrorists to make significant advances.