As the Nigerian national assembly appears to have reeled out of control, with assemblymen consuming a major piece of the nation’s budget while contributing only to the nation’s problems, a petition has already garnered over 10,000 signatures to demand a referendum on maintaining two houses of assembly. 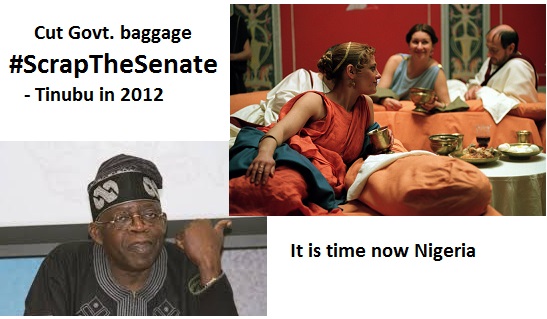 The petition demands the president conduct a referendum to decide which Nigerians wish to keep: the senate or house of representatives.

The petition by “The People of Nigeria” states:

Over 80 Billion Naira is spent servicing the lives and luxuries of 109 Nigerian Senators and their over 2,000 aides.
– Almost similar amount is spent on the 360 members of the House of Representatives and their retinue of Aides.
– No one can categorically say how much the National Assembly budgets each year as it’s budget is the most secretive document in Nigeria.

– No Nigerian can say that they are satisfied with the way and manner Constituency Projects are not executed across the nation.

– The National Assembly as constituted today, is a burden that we are currently bearing to please the mistake of our constitution drafters who desired ‘vast’ representation from all parts of the country. In reality, this can be achieved with lesser number of people in the National Assembly as our experience show that we have never been consulted on any issues as the Law makers represent themselves and not us.
– The National Assembly as it’s constituted today, is confused as to its primary role of lawmaking. They have mistaken “Oversight Functions for harassing, intimidating and humiliating Public officers and Online Media Practitioners who refuse to dance to their tunes.
– The National Assembly has caused Nigeria several deadlocks in governance and passage of important legislation.
–  It’s also known that whatever the Lower House passes, the Upper House confirms. So what’s the use and need of having both of them? This has led to the wasting of the time and energy of Nigerians to pass legislation that ordinarily would take shorter time. – Politics  and selfish-interests are placed above Nigerians, who sometimes have had to wait years to have IMPORTANT and LIFE-CHANGING legislation passed.