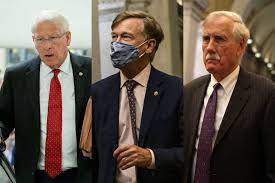 The coronavirus pandemic reared its head in the Capitol again on Thursday, with three sitting senators announcing they have tested positive for COVID-19.

The trio are the latest to suffer ‘breakthrough’ infections despite being vaccinated.

Republican Sen. Roger Wicker of Mississippi was the first to announce a positive test on Thursday. He is currently in isolation, his spokesperson said Thursday. Soon after Wicker’s announcement, Sen. Angus King, a Maine independent who caucuses with Democrats, announced he, too, had tested positive.