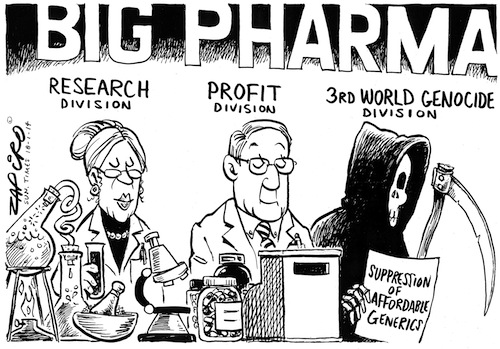 What or how long is it going to take before African traditional medicine is transformed into modern pharmaceutical industry? It is becoming difficult and unsustainable not only for Africa but many cities and states in Europe and America to pay for common generic drugs. The reason is once drug companies are taken over, bought or merged; prices are raised on old drugs. Ebola, like other diseases before it, should have been wakeup calls. See Drug Industry Rip-off

No country or international organization will subsidize these drugs for African countries forever. Even more obvious is that African pharmaceutical industries have the capabilities to produce many of these drugs and manufacture them at home. Some of our scientists prefer to patent their discovery abroad for financial. These “discoveries” are what the traditional medicine man passed on, down to their children that happen to be well educated.

Nobody can claim that we do not have enough scientists, laboratories, teaching hospitals and traditional medicine men and women that can collaborate on extensive re-discoveries. Apart from the fact that we cannot afford to pay international drug companies their dictated prices based on nothing in many cases other than profit, we must look for ways how African countries can start making money from these drugs internationally. Lip service is not enough.

This writer has shared his experience during his days as Primary Health Care worker in Nigeria, when children of traditional medicine men were enticed to attend School of Health Technology to become health officers and nurses all over the Country. It was a success since health clinics, primary health and comprehensive health centers started competing very well with traditional medicine homes, some of which were regulated or certified under Prof. Olikoye Kuti leadership.

Every progress made in African medical industry becomes unsustainable, like every other industries after the initial wave of pioneers leave. In spite of this, Ebola tested the old medical rudimental building blocks of Nigeria and found it solid waiting to be improved on. Whatever our disagreement with Dr. Maurice Iwu with his various “discoveries” of drug for the treatment of various diseases, we do not have enough incentives for independent trials. Time for action.

The history of antibiotic, aspirin etc. originating in Africa is good to boost students in classrooms but putting them into practical uses in our laboratories to be good enough in our hospitals can become money making industry for each country in the African continent. We are way past a budding industry in this area, Africa field work should be leading in pharmaceutical industries.

Africa has lost leadership initiatives in many industries where we have primary advantages. From agriculture to mining industries, we have failed to take advantage of our raw materials because of our taste for finished products that were practiced and perfected outside our reach. Even when we acquire the knowledge, we fail to develop different and improved machineries that are constantly changing and enhanced abroad. Why wait until they become readymade?

We are so fortunate with so many skillful people in most industries willing to work hard for the betterment of the Country but they end up giving up because they do not make a quorum to fight the power of neglect and selfishness or they become politicians. As they get older, they get scared and worry more about their individual survivals and that of the families they must raise. Many of them left lucrative positions at home and abroad, only to be disappointed.

Look at the case of Nigeria’s Minister of Health that imported impotent Nano Silver treatment for Ebola. This was a brilliant precocious medical scientist both in school and after that became a politician. His colleagues had to reject Nano Silver in Lagos. But if he was in the right position at the right time, he could have been the inventor of the cure. Africa has many brains like him in different positions and disciplines from accountancy to help us with corruption to engineers.

The best time to catch these dedicated individuals is when they are young and very idealistic. It is when they are ready to give it all and defy the odds. Unfortunately, if they are not gainfully engaged and employed, their youthful exuberance are wasted into nefarious activities. The old institutions that are supposed to train them and make them into noble citizens are falling apart and replaced with money grabbing schools or colleges where they are trained to be foreigners.

It must be noted that this writer is not indifferent to the high cost of research, production and distribution of drugs which in many cases have to be borne by pharmaceutical companies; that does not justify wild speculation on Wall Street where investment managers turn paper profit and multiple trading into edge fund profits. Let us face it, there is no way African countries can pay for these expensive drugs. Though Nigeria was willing to pay anything for Ebola drug.

Moreover, immunization and inoculation need the backing of the governments because of risks involved especially in highly litigious countries. Cross country or continent field testing can also be controversial as we are well aware of past abuses of the poor and the disadvantaged. Of course Africans have a good reason to cry out if some of the field-testing go wrong.

This is why it is crucial that we improve our traditional drugs into rich pharmaceuticals. Case in point was the re-emergence of polio in Nigeria because we suspected birth control drug was included during preparation. However, we failed to develop ours leading to polio spread.

While the fight against corruption is the beginning, we must not lose focus on where to direct the fruits by building strong institutions that will create employment for our youths. Not just work to get paid, but engagements that will propagate itself into sustainable money generating agricultural, mining and (the point of discussion here,) pharmaceutical industries. If Primary Health Care could succeed in Nigeria at one point, traditional pharmaceutical industries can.

We must plan and anticipate diseases capable of wiping us out, famine that will reduce us to beggars in the world stage, building infrastructure that is expected of any reasonable country before self-aggrandizement. A country or continent that is constantly caught unprepared by every disease or famine has not done its homework in planning. Expecting those that plan for the welfare of their people to come to our rescue all the time is called habitual dependency.