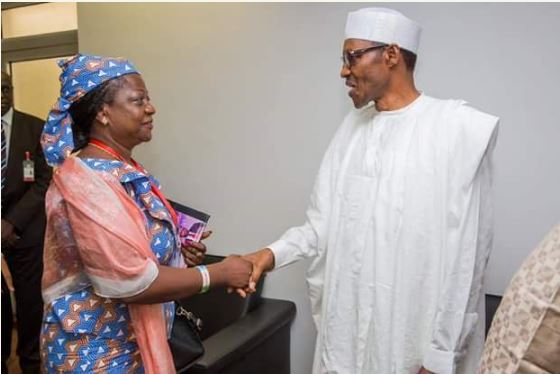 …As he broke three of his bail conditions

The personal assistant to President Muhammadu Buhari on Social media, Laurretta Onochie, Tuesday said that the leader of the indigenous people of Biafra, IPOB, should be pulled back to where he belongs having violated three of his bail conditions granted him by court.

“Time will come when Kanu will be locked up, and the keys thrown into the Atlantic Ocean”, she equally said.

In her statement on facebook tagged, ‘Due process, being followed on little Nnamdi Kanu’, Laurretta described Kanu’s followers as touts, hooligans and hoodlums who do not have formal education and thus were incapacitated in processing information or responding civilly.

According to her, Nigerians should be patient and wait for the court to look into the evidence of Kanu’s spitting on the face of the Judge who granted him the bail.

In her words, “I’m hopeful that the right thing will be done. Which is, Lock him up and dump the keys in the middle of the Atlantic Ocean.

DUE PROCESS, BEING FOLLOWED ON LITTLE “NNAMDI” KANU.

???? I must say that I’m personally impressed by the clamour by Nigerians to have Kenny Okwu Kanu, alias “Nnamdi” Kanu, cut to size.

???? It’s therefore, not true that we are a lawless people, as the Ohaneze Ndigbo would have the world believe.

???? The laws of our land have paths they follow. If anyone goes contrary to the provisions of our laws, they get pulled in by the laws they have flouted.

???? The government of President Muhammadu Buhari will follow due process in all that it does.

Kanu was unmeritoriously granted bail by a Nigerian Court. But he has abused and broken the three conditions that are within his personal ability to honour.

???? The Conditions that were set for his bail are as follows:-

— Kanu must not hold rallies. ❌

— He must not grant interviews. ❌

— He must provide three sureties in the sum of N100 million each.

— One of the sureties must be a senior highly placed person of Igbo extraction such as a senator.

— The second surety must be a highly respected Jewish leader since Mr. Kanu said his religion is Judaism

— The IPOB leader must deposit his Nigerian passport

— He must also deposit his British passport with the court

— He must provide the court with reports on the progress of his health and treatment on a monthly basis.

— The order for him to deposit his Nigerian and British passports also mean he cannot travel out of the country (If this is considered, it is the thirteenth condition).

???? But now that Little Kanu has broken the 3 main conditions of his bail, and gone ahead to establish his own police, army and secret service, it’s time to pull him back to where he belongs.

???? The application for The revocation of that unmerited bail is in process. The court will hear that application after recess.

???? The court granted him that unmerited favour. The court, the same court, is also expected to hear the evidence of his unlawful behaviours and decide whether or not to annul that grace that was granted him.

The truth is that most of Little Kanu’s followers are touts, hooligans and hoodlums. They also grew up in the dingy Onitsha and Aba markets, breathing recycled oxygen and with NO formal education at all. They do not have the ability to process information or respond civilly. So they resort to name calling and abuses. They deserve our sympathies.

???? Let’s be patient. The court will look into the evidence of his spitting on the face of the Judge who granted him the bail and I’m hopeful that the right thing will be done. Which is, Lock him up and dump the keys in the middle of the Atlantic Ocean.