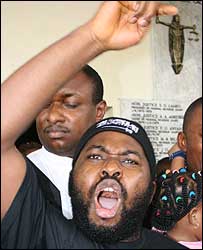 There is no denying the disdain for tribalism by the prophet of Islam. In other narrations, of fighting for tribalism he said to “leave it, it is rotten.” Again he is narrated to have said, “…Behold, Allah (God) has removed from you the arrogance of the Time of Jahiliyyah (Ignorance) with its boast of ancestral glories. Man is but an Allah (God)-fearing believer or an unfortunate sinner. All people are the children of Adam, and Adam was created out of dust.” More references can be found on Zawaj website (http://www.zawaj.com/editorials/nationalism_ahmed.html).

Mujahid Asari Dokubo claims to be a Muslim, but according to these narrations, not only he, but all other northerners and other Nigerians, who clamor for and prescribe tribal based fire and blood regardless of the interest of the nation’s masses, simply for the best and most decent, progressive and non-corrupt leadership, are “not Muslims,” and are rotten people who are so low, they nibble and bite to chew their parents genitals.

A Muslim will never fight for tribalism or nationalism. It is one people and one world, all made from dust. All that separates people is their fear of God and their good and Godly behavior.

The New Testament likewise does not favor tribalism. “There is neither Jew nor Greek, slave nor free, male nor female, for you are all one in Christ Jesus. If you belong to Christ, then you are Abraham’s seed, and heirs according to the promise.” (Galatians 3:28-29)

Many of us pray for and seek a day and a world without borders and without indigenship and ethnic regulations for leadership. A world where a Kenyan man’s son can become president of America, the world’s most powerful nation (That day has come already in America, but the reverse obtains today in political Nigeria).

The concept of tribalism is very foreign to Africa. Many great writers have penned and typed articles on this fact. When we look back at our ancestors, the one thing that defined pre-colonial Africa is the integration not only of citizens but of leaders too.

King Jaja of Opobo, Jubo Jubogha was an Igbo man from Orlu, who was assimilated into and became leader of Ijaw Opobo in Rivers/Akwa Ibom.

General Murtala Mohammed’s father Pam Iyatus from Vom in Plateau state was a Berom man, who assimilated into Hausa Kano and Murtala is recognized today as a Hausa hero, over his Berom ancestry.

Malam Umaru Altine was a northern Fulani man who was the first elected as the Mayor of Enugu; he was again re-elected to serve a second term.

There are tons more examples.

Indeed in pre-colonial Africa, all it took was to migrate into a new territory and prove your diligence and character to be fully accepted, acculturated and be eligible not only for ethnic citizenship but even to lead the nations.

We have Nigerian origin Yoruba chiefs in Ghana, Sierra Leonean politicians and chiefs in Nigeria, Nigerian top government officials in far away The Gambia and so on.

What is happening to Nigeria now as a few of us are so embroiled in dirty, filial genital cannibalistic tribalism is un-African and will actually make our ancestors turn in their graves. Those of us who wear tribal regalia and claim tribal loyalty would actually be discarded by our for-fathers as illegitimate offspring of their great hospitable and progressive legacies.

It must be added that there is a space for ethnocentrism. However this is only useful as regards competing with the positive achievements of those who came before us, to do better than their records; not in tribalism feats, defaming and disgracing what they valued and promoting what they rejected.

In an earlier article, “The Devil Was the First Ethnocentric,” I presented how by refusing to bow for Adam, the devil was the first to portray such shameful behavior, and is the father of tribalism and ethnocentrism. The devil had argued that he, made from fire should not bow for Adam, made of “mere” dirt. The devil was discarded into the pits of hell for such repugnant behavior.

Nigeria’s empty political elite, the enemies of the nation and the 168 million poverty ridden, humiliated masses, have copied a page from the colonial books, by taking advantage of, and festering tribal sentiments as a weapon to secure their inutile holds on power.

Nigeria needs good leaders, short and simple. Regionalism or disintegration is a legitimate quest if raised and sought respectfully and without direct and indirect celebration of, sponsorship and promotion of death; but promoting tribal based leadership is cheating as long as it is one nation and murderous.

The likes of Dokubo Asari, and others north, south, east and west, who argue to cheat Nigeria of its much needed race to recovery and development, by promoting rotational-presidency and ethnic selection and re-election of candidates, are in African terms, abominable inheritors of our great ancestors. Spiritually speaking, they are cannibals, who thrive off of eating the testicles of their fathers.

Written with contributions from Doctor Amadi Jnr. of Muslims Against Terror.