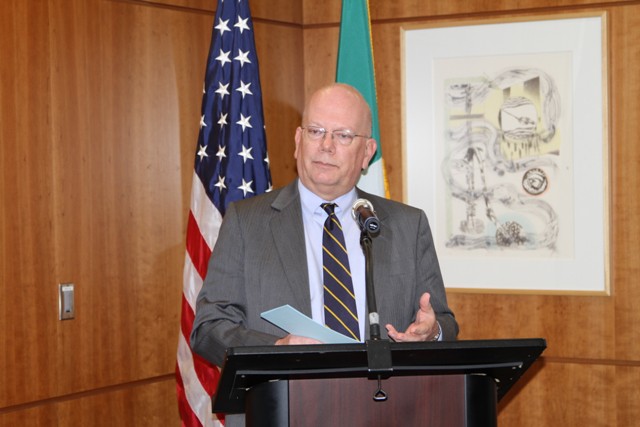 The outgoing United States Ambassador to Nigeria, James Entwistle, has praised President Muhammadu Buhari’s record in the last one year, saying the administration has done well on the economy, fight against corruption and insecurity, given the circumstances it inherited.

Mr. Entwistle will be leaving Nigeria at the end of July, ahead of his retirement from the U.S. Foreign service, after a career spanning 35 and half years.

He told a select group of media representatives, including PREMIUM TIMES, on Friday that considering the very difficult situation Mr. Buhari inherited, the president did well in his first one year in office.

The envoy, who drew a parallel between President Obama and President Buhari, said although it was understandable for Nigerians to have high expectations of change, they, like the American people, should be patient with the administration.

“I think the same thing is happening to President Buhari. It is completely understandable for the people to have high expectations. They are impatient, because they want to see change. But, the president inherited very difficult circumstances.

“Some of the things he identified that needed to be done, like ending corruption, reforms in the petroleum sector, ending of the conflict in the North East, are things that even when you work as hard as you can, they are going to take some time to yield the kind of result you expect. People should be patient.

“It is good that the expectations from Mr. President are very high. But, I think people should remember what he inherited. And in my opinion, I try to be neutral and balanced, I think Mr. President and his team have done a good job in this first year,” Mr. Entwistle said.

On the economy, the out-going ambassador said the sliding oil prices affected most economies, including Nigeria’s. He said these days no country is an “economic island” and what happens in one economy, affects others.

He said President Buhari’s economic team has done a lot, particularly in the areas of exchange rate and removal of fuel subsidy, which he said could see the economy begin to do well.

On the fight against corruption, the ambassador said he has a lot of respect for President Buhari, saying he has remained consistent with his campaign promise to make it the focus of his administration.

“He has done exactly what he said he would do. It’s clear that he has unleashed the investigative agencies to follow every evidence and information wherever it goes. I have been following the investigations of those arrested to see whether there is any evidence that they are politically motivated, I have not found any,” he said.

On U.S. support to Nigeria to help resolve the situation in the North East part of the country, Mr. Entwistle said apart from assistance in the form of military training and equipment, his government provided about $700 million this year in response to the humanitarian crisis in the region.

He lamented the humanitarian situation in the region, assuring that the U.S. government and donor agencies will up their games to save the Nigerians in distress, although he said the primary responsibility still lied with the Nigerian government.

Mr. Entwistle, who described his time in Nigeria as “a marvelous experience”, said he could not have had a better way to end his career than working in Nigeria, which he sees as the US government’s most important relationship in Africa.

“I have been warmly received in every corner of this country. I have no unpleasant experience in Nigeria. I will leave here having enjoyed every minute of my time as U.S. Ambassador. I will leave here with a great sense of satisfaction, because I believe the relationships between our two countries are in very good shape at the moment. Nigeria and U.S. have a partnership of two great democracies working together to make the world a better place,” he said.

He said the experience he would never forget was last year’s presidential election process, which brought President Buhari to power, saying it was the most inspirational thing he was proud to be associated with in his over 35 years career.

“The way the Nigerian people made clear that this time they wanted their votes to count and would accept nothing less. I felt very proud. That’s something I will carry in my heart for ever. It’s up to Nigerians to ensure that 2019 is even better,” he said.