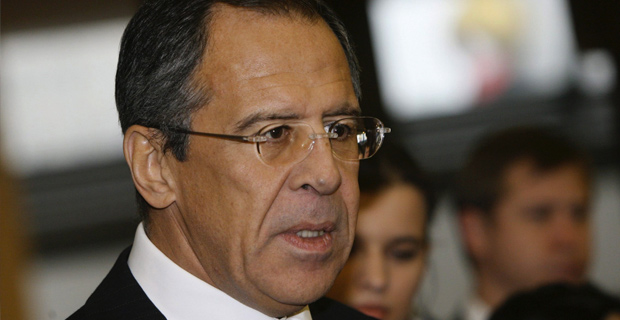 Russian Foreign Minister Sergei Lavrov said on Sunday the goal of the United States in Syria is different than what is publicly stated.

He also said the coalition led by the U.S. knows the positions of ISIS in the country and is not targeting them.

Lavrov told Channel One, the largest television network in the Russian Federation, that analysis of aviation operations in Syria “creates a strange impression” and instead of fighting ISIS “there is something else which is a concern of the coalition.”

He said the coalition purportedly fighting ISIS has “information on where exactly” the positions of the terrorist army are in Syria and Iraq, but “does not give consent to striking them.”

In August intelligence analysts said the Pentagon is not targeting an estimated 60 Islamic State training camps considered key in the ISIS effort to capture and hold territory.

According to Bill Gertz of the Free Beacon, officials have stated these camps are off limits “because of concerns about collateral damage.”

“If we know the location of these camps, and the president wants to destroy ISIS, why are the camps still functioning?” one official said.

The absurdity of the U.S. statement on collateral damage is astounding.

A study by Stanford Law School and New York University’s School of Law found that the number of Islamic terrorists killed as a percentage of total casualties in U.S. drone strikes is 2 percent. The remainder are civilians.

Moroever, so-called collateral or incidental damage has served as a tactic for the U.S. in its war in Iraq.

“The death of many civilians in Iraq during the Gulf War due to the the lack of electricity in hospitals, which was the result of the destruction of almost all Iraqi power plants by allied air attacks, has been asserted by Iraq as disproportionate collateral damage,” notes Horst Fischer.

The United States and its allies are not effectively targeting ISIS — and, in fact, continue to resupply the group, as a number of Iraqis claim — because eliminating the terror group would conflict with the ultimate objective in Syria: the overthrow the al-Assad government and the balkanization the country.

The latter was explained in a document produced by the Ford Foundation funded Brookings Institute.

“Deconstructing Syria: A new strategy for America’s most hopeless war,” authored by Michael E. O’Hanlon, states that “the only realistic path forward may be a plan that in effect deconstructs Syria” and “create pockets with more viable security and governance within Syria over time,” areas that “would never again have to face the prospect of rule by either Assad or ISIL.”

Both so-called “centrist” Democrats and their neocon colleagues support undermining Syria and are responsible for the humanitarian crisis now threatening to swamp Europe with refugees.

The United States has consistently supported the Syrian “rebels,” now virtually all radical Wahhabist jihadists. This includes ISIS and al-Nusra, the former created out of al-Qaeda in Iraq and the latter from native Syrian mujahideen. The State Department, of course, denounces both as terrorist groups while covertly supporting them as part of the effort to undermine al-Assad.

Lavrov only hinted at the real situation in Syria. The Russians, however, are well aware of the fact the ISIS bombing campaign is a farce and a public relations gimmick and understand the real objective in Syria, which includes removing the Russian presence in the region.