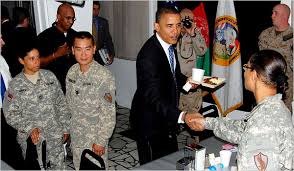 US troops stationed in Afghanistan came to the realization that some Afghan commanders were sexually abusing local boys and though they often heard the boys screaming, the US Army told them to ignore it, a New York Times report says.

“At night we can hear them [Afghan boys]  screaming, but we’re not allowed to do anything about it,” Lance Corporal Gregory Buckley Jr. reportedly told his father Gregory Buckley Sr before being killed in 2012.

Buckley Sr said he told his son to tell his commanders about these incidents.  “My son said that his officers told him to look the other way because it’s their culture,” he told NYT.

What Buckley Jr described to his father resembles Bacha bazi, an illegal practice that involves sexual abuse of prepubescent and adolescent boys.

One more US officer, a former lance corporal recalled a terrible incident when he entered a room in a base and saw three or four men lying with children between them.

“I’m not a hundred percent sure what was happening under the sheet, but I have a pretty good idea of what was going on,”he told NYT on condition of anonymity.

“The reason we were here is because we heard the terrible things the Taliban were doing to people, how they were taking away human rights…But we were putting people into power who would do things that were worse than the Taliban did — that was something village elders voiced to me,” he said.

Quinn’s story goes back to 2011 when he and Sergeant Charles Martland started receiving complaints about Afghan local police units who US soldiers were training.

One militia commander raped a 14-15-year-old girl, but he just “got one day in jail” and then the abused girl was forced to marry her offender, according to Quinn.

“We’re being praised for doing the right thing, and a guy just got away with raping a 14-year-old girl,” Quinn said, adding that though he reported the violation to his commander, he was told that nothing could be done.

Quinn remembered another incident when an Afghan woman came to at American base with her son. An Afghan police commander, Abdul Rahman, abducted the boy. Rahman forced him to become a sex slave and chained him, the woman said. Though eventually the boy was released, both mother and son feared it would happen again.

The woman said that “…her son was such a good-looking kid, he was a status symbol” for the commander.

Quinn said that when he confronted Rahman and told him “you are held to a higher standard if you are working with US forces and people expect more of you,” the Afghan commander laughed in his face.

“I picked him up and threw him onto the ground,” Mr Quinn said, adding that Sergeant Martland joined in. “I did this to make sure the message was understood that if he went back to the boy, that it was not going to be tolerated.”

Following the incident the Army relived Quinn of his command and later he resigned. Washington is now forcibly trying to retire Martland.

A spokesman for the American command in Afghanistan, Colonel Brian Tribus, said: “Generally, allegations of child sexual abuse by Afghan military or police personnel would be a matter of domestic Afghan criminal law.

“There would be no express requirement that US military personnel in Afghanistan report it,” he wrote to NYT in an e-mail.