As seen in a report uncovered from June 29th 2015, barely a Month after the President Muhammadu Buhari’s swearing in ceremony, the President had planned a northerner take over of the NNPC board.

Confirming the report, Dr. Maikanti Baru would be appointed GMD of the NNPC board, with Delta state Ibe Kachikwu’s sack exactly a year later, on July 4th, 2016. In March this year, Isa Inuwa also on the “report” list was appointed GED/COO for NNPC Corporate affairs.

President Muhammadu Buhari’s delays in making his cabinet appointments comes to question recognizing his determination on certain northern candidates right from when he assumed office. Was the delay because the President had wished to pump in all these candidates and was being advised to resist that temptation? In light of current appointments, this becomes a legitimate question to ask. The new NNPC board is constituted of four northern names with “Malam” titles and three Southern names in continuation of a protested predilection for northern appointees in all departments.

The report from June 29th 2015 as published in Omojuwa.com follows:

Barely 48 hours after President Muhammadu Buhari dissolved the board of Nigerian National Petroleum Corporation (NNPC), intense lobby has begun to fill the positions of the Group Managing Director (GMD) and those of Executive Directors. Eight new structures are being proposed for the corporation and it is already awaiting the approval of the President.

It was further gathered that there was likely to be further sweeping changes at NNPC, a development which may lead to the sack of other Managing Directors and General Managers. As part of measures aimed at ensuring a smooth take-off of the proposed new structures, some highly placed northerners from the core northern states are already strategizing to fill existing vacancies, while other “qualified” officers from the North-Central, South-West, South-East and South-South geo-political zones, would be “pushed to obscure departments and positions.” 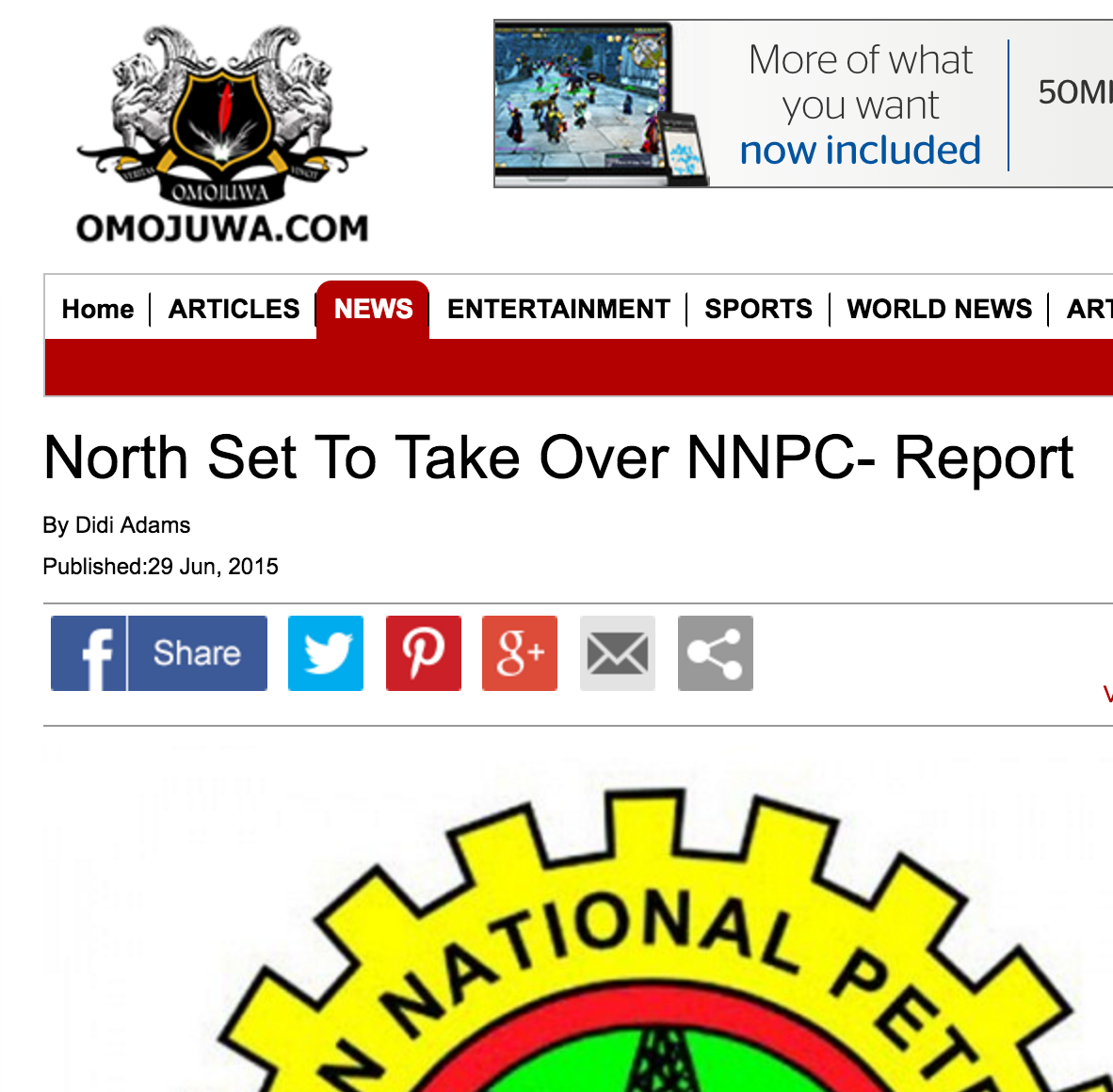 So far, Daily Sun further gathered, three names from the North-West and North-East zones are believed to have been penciled down for consideration and possible approval for the position of Group Managing Director (GMD) of the NNPC. The three persons are: Malam Isa Inuwa from Kano State, Dr. M. K. Baru, Bauchi and Alhaji Sa’adi Farouk, Sokoto State.

Dr. Baru is a former Group General Manager of NAPIMS, a subsidiary of the NNPC, while Malam Inuwa, whose background is in Accounting, is the Deputy Managing Director/Chief Executive Officer of the Nigeria Liquefied Natural Gas (LNG) just as Alhaji Farouk, had served as Group Executive director (GED) Exploration Production of the NNPC.

A source said some powerful forces from the North close to the Presidency that include a governor of one of the North-Western states, is said to be leading the trio of Malam Sarki Abba, Adamu Adamu and AVM Muktar in lobbying Aso Rock Villa to approve the new structure and appointment of one of the three nominees. Source: sunnewsonline; Report culled from Omojuwa.com: http://omojuwa.com/2015/06/north-set-to-take-over-nnpc-report/