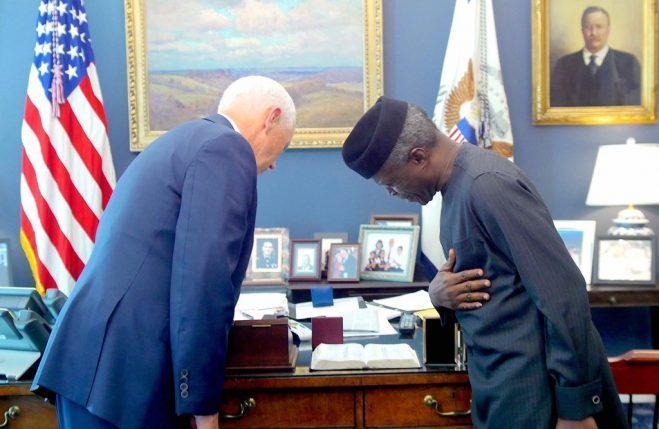 While it is obvious to all that the northern cabal at the presidency is hellbent on replacing Vice President Yemi Osinbajo from the south west, it is peculiar to note that in a surprise very short letter, the US made sure to mention Nigeria’s Vice president as key to relations with America.

The letter said in its last paragraph:

“I am pleased that following our meeting last year, our Vice Presidents are also building on our longstanding history of cooperation.”

It appeared the entire essence of the letter was to tell the Buhari government and 2-3 men cabal in the presidency that the US was watching the developments in Nigeria.

It is recalled that as soon as president Buhari selected his cabinet which consisted of many corrupt and deadly candidates involved in 2019 election rigging and deaths, the US announced sanctions on Nigerian politicians. Showing the US was watching Nigeria’s politics.

It is no rumor that the cabal wish to displace Vice president Yemi Osinbajo with Babagana Kingibe or any other southern obedient and docile stooge, in case Buhari does not complete his term and as a build up to the replacement’s candidacy in 2023. The cabal has been obsessed with this crazy plot and going all out openly to discredit the Vice president. It is in this wake that President Trump wrote the unusual letter that was quite short but made sure to mention the importance of Vice president Osinbajo and US’ relations with him.

On behalf of the American people, I extend our warmest greetings and congratulate you on the 59th anniversary of Nigeria’s independence.

Nigeria is among our strongest partners in Africa.  We share common goals of expanding trade and growing our economic relationship.  We are allies in the global battle against terrorism, and we want to see Boko Haram and ISIS-West Africa driven out of the region and other insurgencies like them dismantled.  The United States welcomes efforts by your administration to diversify opportunities for your talented, creative, and hardworking people to the benefit of both our countries, Africa, and the world.

I am pleased that following our meeting last year, our Vice Presidents are also building on our longstanding history of cooperation.  I wish the people of Nigeria continued success as you mark another year of independence.