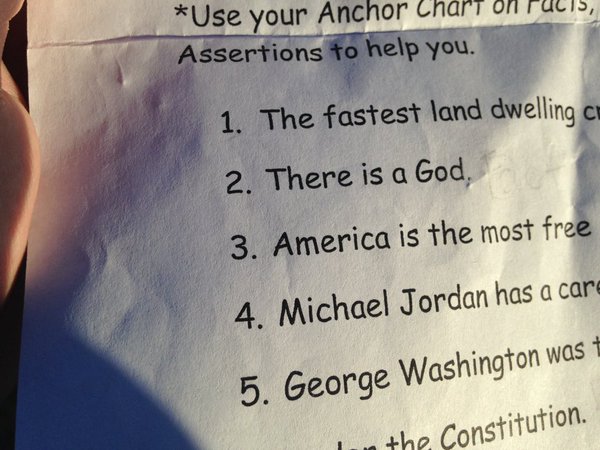 Texas Governor Greg Abbott has announced he is inviting Jordan Wooley, the young girl in the story below, to the governor’s mansion in admiration of her courage and conviction.

I’m inviting this 7th-grader to TX Governor’s Mansion to thank her for having the courage of her convictions. #tcot https://t.co/hvxZ4OSXjO

Parents of students at a middle school in Texas are upset after a classroom assignment forced children to deny the existence of God or take a failing grade. Jordan Wooley, a 7th grade student at West Memorial Junior High School near Houston, bravely spoke before the Katy Independent School District (ISD) school board Tuesday about the assignment handed out by her reading teacher which she says made her question her faith. The exercise asked students to note whether a series of statements were either factual claims, commonplace assertions, or opinions. “Today I was given an assignment in school that questioned my faith, and told me that God was not real,” Wooley told school board members. “Our teacher had started off saying that the assignment had been giving problems all day, and we were asked to take a poll to say whether God is fact, opinion or a myth,” Wooley said. “And she told anyone who said fact or opinion is wrong and that God is only a myth.” Wooley described how the teacher went on to tell students who believed in God “they were completely wrong.” “And whenever we asked why we were led to believe he was true if he is untrue, she said to ask our pastors,” Wooley recounted. She also described to board members how the teacher asked her to prove God’s existence, at which point the student referenced the bible and stories about people who died and “went to heaven” only to come back and tell their stories. “And she told me that both were just things that people were doing just to get attention,” Wooley said.

This was part of graded assignment and #katy middle schooler says she was told she had to say God wasn’t real #khou pic.twitter.com/5EQ5EnSYi7

The distraught student also related how emotional tensions in the class were elevated, describing how one of her friends grew so incensed she threw everything off her desk and onto the floor.

“Another child had asked the teacher if we could like try to put what we believe in on the paper, and she said you can if you want to get the problem wrong, and you’ll fail the paper if you do.”

Wooley’s mother Chantel was blown away by the assignment.

“[T]he kids were caught in a Catch-22,” Chantel told KHOU. “If they argued their faith, they were being told they were arguing against their faith. And that happened in the classroom.”

Katy ISD released a statement insisting “the assignment was intended to encourage critical thinking and dialogue and not question any students’ religious beliefs,” according to KHOU.

“Still this does not excuse the fact that this ungraded activity was ill-conceived and because of that, its intent had been misconstrued,” the statement said, adding that the unnamed teacher was being vilified “without knowing her, her Christian faith, or the context of the classroom activity.”

Wooley says, despite Katy ISD’s assertion, the assignment was in fact graded, and that to pass she would have had to write something that went against her faith.

“I love reading, so for me personally to have to fail reading because of what my beliefs are just shocked me,” Wooley said.