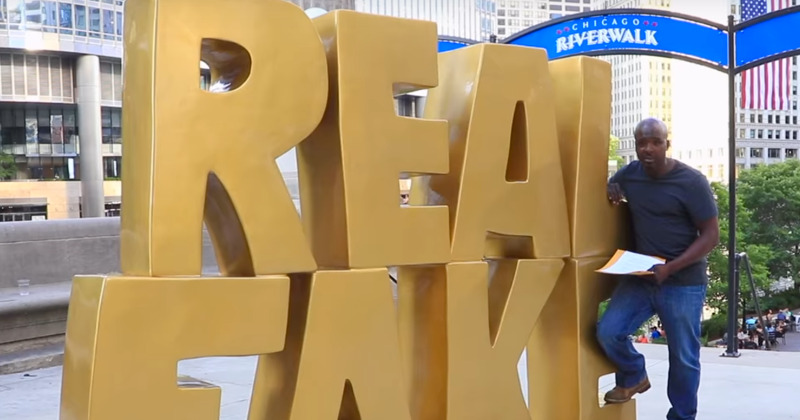 Black community organizers in Chicago are blasting the ‘racist Democrat machine’ and rampant corruption as the primary reasons their once-great city is deteriorating rapidly amidst shocking violence, crippling economic depression, and eroding infrastructure in a powerful new short film.

“The sculpture sits as perfect photo-op to take selfies and group photos flipping off the Trump sign, while standing underneath it right next to the golden sculpture that screams ‘REAL FAKE,’” they report, saying the incendiary monument “could only be intended to give a giant middle finger to President Trump.”

In their scathing commentary, local activists Paul McKinley and Mark Carter lay blame squarely at the feet of nefarious city and state political leadership – which is overwhelmingly Democrat – and even Barack Obama and Bill Clinton, also expressing hope that President Trump has the opportunity to make Chicago great again and inviting his administration to help drain the Illinois swamp.

“It is ironic that this sign showed up right here, and not in front of City Hall, not in front of the Capitol,” McKinley says, addressing the ‘REAL FAKE’ sculpture. “What you see here is the great deception. It sits here to deceive you and get your mind off real issues.”

“This is an attempt by the same liberal agenda to talk about politics way up… in Washington D.C., but never about the politics right here in Chicago.”

“The rest of the city looks like a bomb has been dropped, like a third world country.”

Both men denounce the notion that Donald Trump could possibly be to blame for decades-old local issues when he has only been president for six months, and accuse progressives of simply using him and the specter of ‘white racist conservatives’ as scapegoats to deflect attention from their own self-serving and/or criminal behavior.

“They want you to be focused on Donald Trump being the problem,”asserts Carter. “There’s nothing fake about this guy – he tells you what he’s about. The fake is Barack Obama, the fake is Bill Clinton.”

“The Democratic machine in this city is intentionally dummying down the people, socially engineering the people into poverty.”

“These are white and black racist Democrats doing this to us,” he continues. “They don’t want the killing to stop – they need the people to continue to be poor, they need these bloodsucking programs that have never done anything to bring down violence, unemployment, poverty.”

The men conclude by asking President Trump to send in federal investigators to break up the corrupt Chicago juggernaut – something he has already threatened to do.

“The feds need to come in and investigate the city council in this city, the state representatives, the state senators, the congressmen,” Carter says. “If Donald Trump wants to come here and get the real answers – come here and talk to the real people, we’ll show you you how things are working in this city.”

“If he does that, he can make Chicago great again,” says McKinley in closing.

This is not the first appearance McKinley and Carter have made in films denouncing Democratic politicians and attempting to pry black Americans away from their overwhelming loyalty to socialist demagogues.

In “Voices of the Ex-Offender – Chicago Activists Message to Black America” – another presentation by Rebel Pundit from 2014, they delivered a similar wake-up call, which Infowars covered at the time.