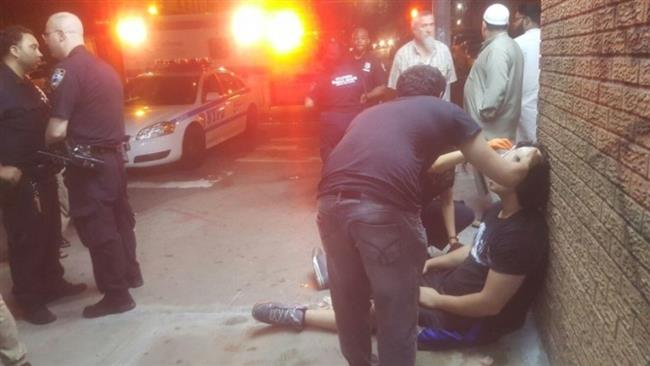 Two Muslim teenagers have been viciously attacked outside a mosque in New York City by an assailant who shouted anti-Islamic slurs at them, a Muslim advocacy group said.

The New York chapter of the Council on American-Islamic Relations (CAIR) released a surveillance video of the attack on Monday, calling on police to investigate the incident as a hate crime.

However, a law enforcement source at the New York Police Department’s hate crimes unit said investigators had ruled out the attack as a bias crime, Reuters reported.

The incident took place on Sunday night as a 16-year-old boy was taking a break from prayers outside Brooklyn’s Muslim Community Center.

The video shows the youth being punched, kicked and stomped by an attacker as he lay in the street.

CAIR said the assailant was heard shouting, “You Muslims are the cause of all the problems of the world” and calling the teens “terrorists” as he beat them up.

The 16-year-old victim suffered a concussion, cuts, bruises and a swollen eye and was transported to a hospital.

Another teenager on a bicycle was chased and attacked when he rode past the scene of the assault.

The incident was at least the third involving attacks on Muslims in the US over the weekend.

Also on Sunday, a Muslim physician was shot and stabbed while he was on his way to a mosque in Houston, Texas.

Arslan Tajammul, an eye specialist in his thirties, was attacked by three masked gunmen while he was heading for morning prayers.

The motive was unclear, but came a day after another Muslim man was beaten outside the Fort Pierce Islamic Center in Florida.

CAIR previously said that 2015 was the most intense anti-Muslim year in American history.

American Muslims say they are experiencing death threats, assaults and vandalism unlike anything they have experienced since the September 11, 2001 attacks, according to the New York Times.