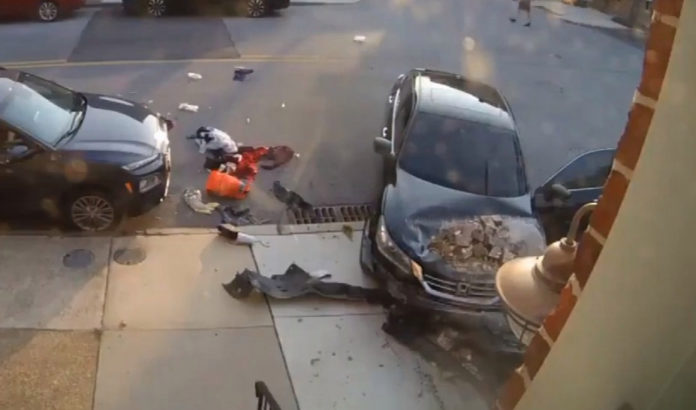 Loco black woman attempted to strike a man removing stuff from the trunk of the car three times in a crazy confrontation on the street.

Miraculously, the man managed to dodge the front of the car by mere inches as it crashed into the house.

The impact of the crash caused bricks to rain down on the hood of the car, denting it.

The woman gets out of the car and begins chasing the man down the street as he gestures angrily back towards her during the pursuit.

She grabs the man by the hood of his sweater and the pair fall down in a heap on the steps outside of another home.

The man then sprints over to the other side of the road towards the entrance of a home.

That’s when the car, apparently driven by the man’s angered lover, darted forward in an attempt to ram into him with the hood of the vehicle.

Once again the car narrowly misses the man, this time crashing head-on into a brick wall.

With emotions clearly running high, the woman emerges from the driver’s side of the crashed car and confronts the man face-to-face.

Again and again the woman tried to crash the man who managed to escape each time.

The man is seen almost bouncing on the spot, appearing to goad and taunt the woman as she gets back into the car.

The woman backs up the car and the surveillance footage skips. In the next frame, the man is seen beating his fists against the windshield of the car as it reverses.

As he turns his back to the car, the woman tries for a third time to run him over.

The resident that lives there is seen opening the front door to assess the source of the commotion.

As the couple brawl on the steps, that resident can be seen shutting the door behind them.

Bystanders eventually race over to separate the pair.

It remains unclear what set off the violent altercation, however, the pair left behind a destructive scene in their wake.

A witness on social media said neither the man nor the woman were seriously harmed.

When quizzed as to whether the woman was arrested, the person who captured the footage said: “No, she was taken to hospital.”

Baltimore PD has been contacted by The Sun for more information.