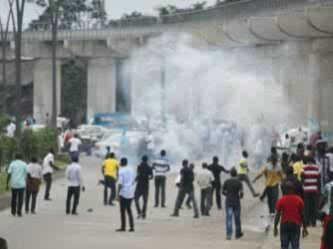 Ado-Ekiti, the Ekiti State capital, further descended into chaos Friday morning with rampaging thugs, believed to be loyal to the Peoples Democratic Party [PDP] and the National Union of Road Transport Workers [NURTW] charging around the city and unleashing violence on residents and property.

Already, the campaign office of Governor Kayode Fayemi and the secretariat of the All Progressives Congress, APC, located at the Ajilosun area of the city, have been torched.

Some residents were beaten up and vehicles burnt, witnesses said.

The spokesperson for the Ekiti State command of the police, Olu Babayemi, confirmed the incident, saying the command had poured officers on the streets to contain the situation.

“There was a protest in town but the police have moved in,” Mr. Babayemi said.”For now, we are trying to restore normalcy and ensure lives and property are secured.”

Mr. Babayemi confirmed that the APC secretariat and Mr. Fayemi’s campaign office had been vandalised and torched.

The immediate cause of the violent protest is unclear, but the city has been on the edge since Monday when thugs believed to be sympathetic to the PDP stormed a court and attacked the judge, O. Ogunyemi, who was hearing a case concerning the eligibility of Governor-elect, Ayodele Fayose, for the recent governorship election in the state.

The court sitting was disrupted, litigants were beaten while the judge was ferried to safety by police after he was threatened by the militants, the state chief judge explained on Thursday.

On Thursday, another set of political thugs backing Mr. Fayose descended on another court, attacking a judge and other staff.

The assailants attacked Justice John Adeyeye, beating him up and ripping his clothes for being allegedly rude to Mr. Fayose.

The pandemonium that ensued scuttled the Ekiti State Governorship Election petition Tribunal sitting billed for the day at the High court, Ado-Ekiti, as judicial workers abandoned their duty post and ran for safety, witnesses and the state judiciary authority said.

In response to the attacks, the state Chief Judge, A. Daramola, ordered all state courts to remain closed until adequate security measures are in place, according to a statement by Chief Registrar Obafemi Fasanmi.

By Thursday night, a former chairman of the Ekiti state chapter of the NURTW and a core loyalist of Mr. Fayose, Omolafe Aderiye, was reportedly killed.

Mr. Aderiye is believed to have led the thugs who assaulted the judges on Monday and Thursday.

The circumstances of his death remain unclear.

The police said they would not comment on that yet as their immediate priority is restoring calm and order to the Ekiti state capital.