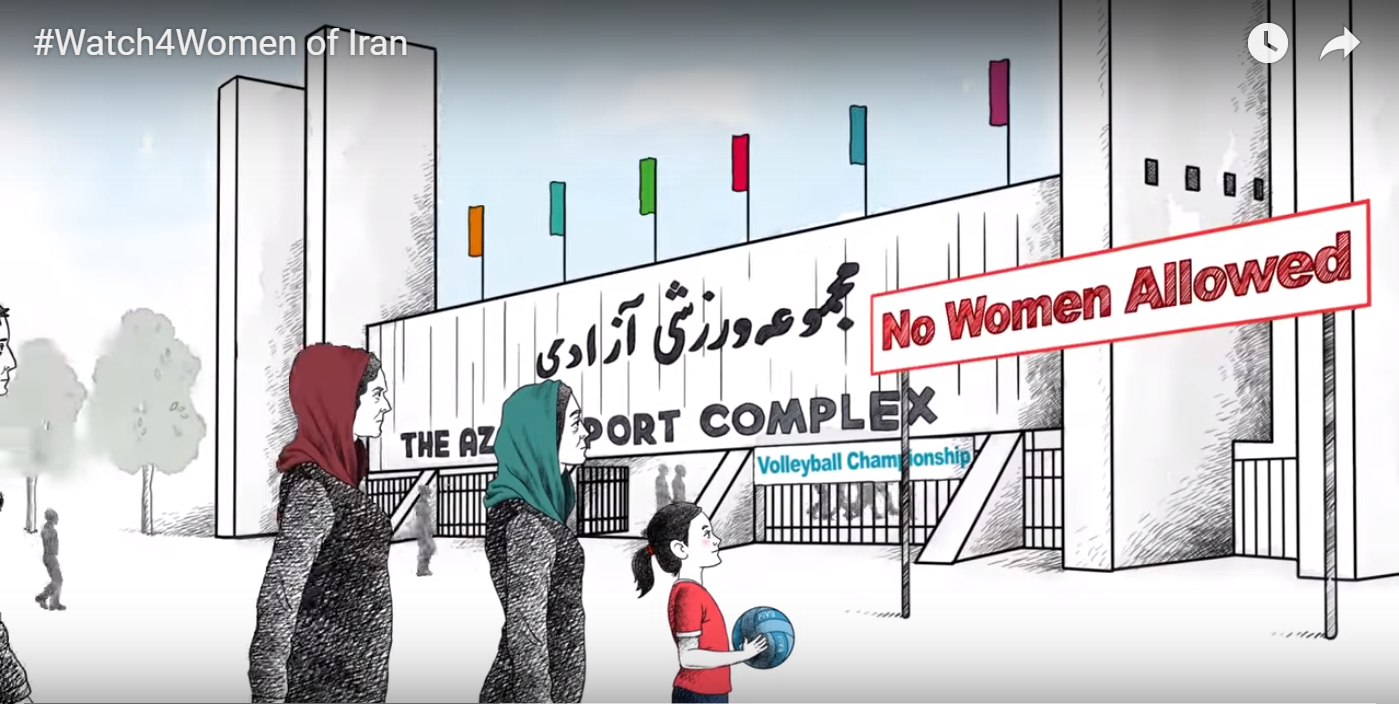 An international volleyball tournament in the Iranian capital has thrown into sharp relief a debate in international sporting associations on how to deal with nations that restrict women’s rights as athletes and/or spectators. How the Federation Internationale de Volleyball (FIVB) evaluates next month’s World League in Tehran is likely to shape debate on how international sports should handle countries guilty of violations of women’s and human rights.

At stake in the debate is whether international sports associations should refuse hosting rights to nations who restrict women’s rights or use the awarding of tournaments as a means of fostering domestic pressure for the lifting of restrictions. The debate focuses on Iran, which unlike Saudi Arabia, the only other country that bans women from attending male sporting events and men from watching women’s competitions, is eager to host international tournaments.

FIVB, in contrast to world soccer body FIFA which refuses to award hosting rights to Iran, has argued that a refusal would penalize players and male rather than female fans in the Islamic republic.

FIVB has moreover suggested that forcing women’s entry into Iranian stadiums was likely to provoke violence against women wanting to exercise their right. The fact that awarding rights would provoke violence would seem to favour a refusal to award hosting rights to Iran rather than accept a reality that is imposed in part by threats of violence.

Iranian backtracking on earlier promises to lift the ban on women for international volleyball tournaments like the World League in Tehran and an earlier Asian Football Confederation (AFC) tournament in Iran further calls into question whether engagement instead of boycott is the more effective approach.

The glass is half full and half empty in the debate. The dilemma is built into the charters of international sports associations like FIVB that champion anti-discrimination but restrain them becoming embroiled in political and religious issues. Both sides in the volleyball debate sum up aspects of Iran’s reality and the volleyball federation’s experience in the country to argue their positions.

Proponents of engagement note that Iran has proven in the battle over its nuclear program that it is willing and able to sustain sanctions and unlikely to bend easily when penalized. Iran, they argue, drove a hard bargain when it finally agreed to serious negotiations.

For their part, opponents of engagement charge that Iran has repeatedly backtracked on promised concessions. At stake, the opponents say, is given the failure of the engagement approach the need for international sports associations to uphold principles and their commitment to values of equality and universal human rights.

Refusal to demonstrate that commitment, they say, would reduce their adherence to those principles to lip service and turn it into a farce. It would also hand a victory to those who threaten violence, a striking move in a world that vows not to be intimidated by indiscriminate political violence by the likes of groups like the Islamic State.

FIVB, which has been pushing for Iranian concessions not only during the World League but also more permanently in Azadi Stadium, Iran’s flagship sporting facility in Tehran, says it will evaluate the effectiveness of its engagement in the wake of next month’s tournament.

The FIVB first backed away from its earlier threat to boycott Iran when it last year went ahead with its Beach Volleyball tournament on Kish Island, a Muslim-tinted Las Vegas style resort developed before the 1979 Islamic revolution, despite Iran’s backtracking on its consent to women’s attendance of matches. Iranian officials justified their reversal by pointing to threats by religious groups that blood would be spilt if women were allowed to attend.

The FIVB secured a women’s section in the stadium despite the threats and women believed to be relatives of Iranian volleyball federation executives rather than from the public attended a couple of matches. Women fans who travelled to Kish to watch matches were barred entry.

The situation in Tehran next month is likely to be no different as supporters of President Hassan Rouhani, widely viewed as an advocate of reduced social controls, and Iranian hardliners battle over Iran’s future in the wake of the lifting of the nuclear-related international sanctions. The fact that the battle over women’s unfettered right to attend sporting rights is part of a larger struggle in Iran significantly reduces the FIVB’s chances of influencing Iran.

Hard line threats of violence designed as much to intimidate their opponents as to attempt to keep Iranian moderates in line are not restricted to sports.

Bahrain stripped Sheikh Isa at the beginning of this week of his Bahraini nationality. The move against Sheikh Isa was part of a renewed crackdown on Bahrain’s majority Shiites by the Gulf island’s minority Sunni rulers.

General Soleimani said the it would spark “the beginning of a bloody uprising” that would lead to the “annihilation” of the country’s “bloodthirsty regime.”.

The warning by General Soleimani, who commands IGRC forces in Syria that support the regime of President Bashar al-Assad and who played a key role in shaping Shiite militias confronting the Islamic State in Iraq, was directed as much at Bahrain as it was at those in Mr. Rouhani’s government who want to reduce tensions between Iran and Saudi Arabia.

Ironically, Bahrain’s move against Sheikh Isa serves the purpose of Saudi Arabia which has been seeking to strengthen Iranian hardliners as part of its struggle with Iran over regional dominance in the Middle East. Like when it executed a prominent Saudi Shiite cleric in January, Saudi Arabia hopes that strengthened Iranian hard liners will obstruct Mr. Rouhani’s US-backed efforts to return Iran to the international fold.

The Iranian power struggle and its role in the covert war between Iran and Saudi Arabia constitutes a high stakes battle that is far beyond the paygrade of internationals sports associations like the FIVB. With Mr. Rouhani and Iranian moderates having bigger fish to fry, it precludes the FIVB from getting any real foot on the ground in its effort to secure women’s rights. Under the circumstances, the FIVB and international sports associations are best served by upholding principles and standing on the side lines until the dust settles and new opportunities arise.