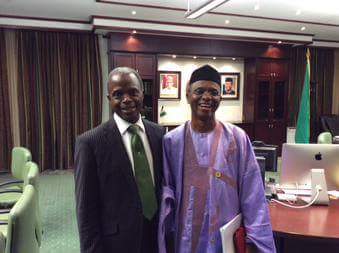 A recent mischievous news report has that claimed Vice President Yemi Osinbajo and Kaduna Governor Nasir El-Rufai are having some kind of rift. Well this picture says it all. We are reliably informed that the report is total balderdash. El-Rufai and Osinbako are together laughing at the desperate attempt by die-hard PDP Jonathanians to try to divert the war against corruption and the corrupt.

Rather than quarrel, VP Osinbajo and Governor El-Rufai spent over an hour together as they usually do in private after the last meeting, typically hammering out strategies to revive Nigeria.

We will like to inform our readers that they should not waste their precious time reading such insane reports and should continue to count their blessings that the Jonathan robbery era is over and Nigeria is becoming one of the least corrupt nations in the world and a most progressive nation at last.