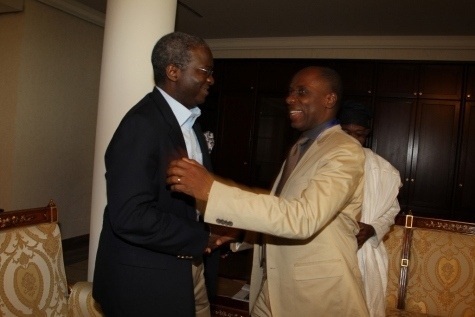 Governor Fashola and Amaechi, two Nigerian governors at the head of tackling and containing Ebola

While devastating reports continue to stream out of West Africa, where the deadly virus has overwhelmed already weak public health systems and left thousands of people dead, and anxiety grips the United States over the first case of Ebola diagnosed in the country, one nation serves as an example of hope: Nigeria, which appears to have successfully contained Ebola.

As concerns spread over U.S. hospital readiness, there are some lessons to be learned from Nigeria, where officials managed to get ahead of the fast-moving virus after it was brought into Africa’s most populous country by an Ebola-infected man who’d flown into Lagos. This week, the U.S. Centers for Disease Control and Prevention reported that the outbreak could be coming to an end in Nigeria, with no new Ebola cases since Aug. 31.

As in the U.S. case, Ebola arrived in Nigeria by passenger plane. But unlike Thomas Eric Duncan — who arrived in Dallas before he became symptomatic and was therefore not contagious during his flights from Liberia to Texas through Brussels and Dulles International Airport — Patrick Sawyer was already symptomatic when he landed in Lagos on July 20. At that point, Sawyer, Nigeria’s Patient Zero, was contagious and dying.

It was a nightmare scenario with the potential to spiral out of control, given the bustling city of Lagos, Africa’s largest, is a major transportation hub. As Sawyer was placed in isolation, public health officials had to track down every single person who’d come into contact with him, from the flights he’d boarded to the Lagos airport and the private hospital where he went after landing. And they had to do so quickly, making the process known as contact tracing a priority.

“In the whole system approach in beating the war on Ebola, contact tracing is the key public health activity that needs to be done,” said Gavin MacGregor-Skinner, who helped with the Ebola response in Nigeria with the Elizabeth R. Griffin Research Foundation. “The key is to find all the people that patient had direct close contact with.”