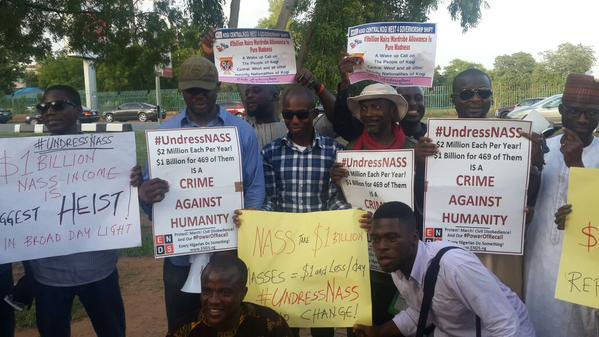 These are times of great hardship, destitution, desperation, displacement and death for Nigerians. The destinies of our children and the children we hope to have, balance precariously on the probity and profoundness of the change we have decided to embark upon. This change of our ways as a nation must be total and complete. The world also watches closely in this day of modern media; concerned and anxious that Nigeria may be rescued from the abyss and rise again to its true position for Africa. Africa, Blacks and indeed minorities around the world hope. They hope that Nigeria will restore their pride and be a beacon and resort for recourse in trying times.

Corruption is the bane of our beloved nation of many great nations. Nigerians on the 28th of March made a statement: that we reject corruption and have decided to do away with it once and for all and in totality. We banished poverty and terror, the offspring of corruption as we revolted at the polls against a cabal who had ganged up.

The open fleecing of our commonwealth by members of the National assembly cannot and will not continue. In the words of late sage Fela Anikulapo Kuti, “few people go dey part with big money and the rest dey hungry.” While 80% of Nigerians live under $2/day with 100 million Nigerians destitute, living under a-dollar-a-day according to the national statistics bureau, these lawmakers budget and spend over N150 billion ($1 billion) to themselves every year. A senate that only threatened to impeach the past president when his actions affected their interests and never once did when it affected ours.

Tomorrow am at NASS Abuja, we offer them 90% cut. Either they 1.Take it or 2.Justify every extra penny they need or 3.Resign. #UndressNASS

We have complained for years. Late President Umaru Yar’Adua attempted to force down the stupendous income of these assemblymen before he passed under suspicious conditions. Transform Nigerian Movement (TNM) on the 23rd of June, 2010 in a terse statement declared that enough was enough. Our advice fell on deaf ears. The senate today which still has a majority of the same members including as its leadership, guilty of the wrecking of the nation via the unconstitutional and inhumane guzzling of its commonwealth, protected itself and voted under the previous coterie corrupt administrations to keep increasing its jumbo earnings. 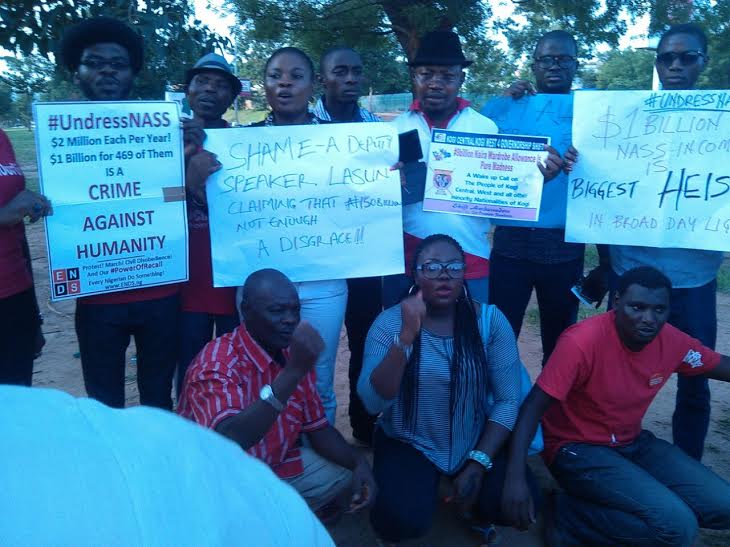 Today as we rev-up our protests, the senate attempts to blindfold Nigerians, taking us for individual and collective fools by pointing to the “autonomous” Revenue Mobilization Allocation and Fiscal Commission, RMAFC, a brainchild of ex-dictator Ibrahim Babangida, as the culprits. Whereas, while acknowledging that over the past several years, RMAFC have been co-conspirators in the defrauding of Nigeria by lavishing assemblymen with the world’s highest salary and the most ridiculously stupendous allowances in modern history;

and while in this Position we demand the firing and charging of RMAFC’s directors (commissioners) and overhaul or scrapping of the entire irresponsible and treacherous body; we are not stupid not to know of the extra-RMAFC allowances the senate and House proportion to themselves also to the tune of billions of naira.

We are aware of the illegal quarterly “constituency project” funds to the tune of N160 million/year for Reps and N240 million/year for Senators as at 2012. Funds mostly usurped, coveted for political campaigning or personalized to beggar the constituents.

We are also aware of how senators remunerate themselves with committees upon committees.

We know we do not know the whole of the superfluous jumbo budget of our national assembly. This is again intentional and malicious. The picture is more likely worse than we recognize. According to the former President of the Nigerian Bar Association (NBA) and human rights activist, Dr. Olisa Agbakoba, Nigerian senators get as much as N1 billion ($5+ million) per annum and Reps, N600 million ($3+ million). We are talking of as much as $1.5 to $2 billion for only 469 people out of a national budget of $22 billion for all 176 million Nigerians. Compare, the entire 26 million population of Ghana survive on a budget of just $6 billion. This National Assembly, NASS defalcation is not only illegal, but a sin and curse.

To this effect, we demand from the Presidency:

We will continue our #OccupyNASS protests Tuesday 10 am at the National Assembly and elsewhere around the country and around the world.

We invite all able bodied Nigerians to join our revolt for our freedom. To join us in peaceful protest and acts of civil disobedience, to force this change to be complete. This is a mission for true representation – to assist our representatives to better represent us. We are doing this to help them and make them proud at their job. There is no way that senators and House of Rep members on a largesse of millions of dollars every year can ever relate with and represent the constitutions from which they departed to the beautiful Abuja. Today, earning these billions of naira, they can unfortunately only represent each other, being as it is, members of a new family and constituency – the FCT constituency, all 469 of them. And this must stop. And this will stop. 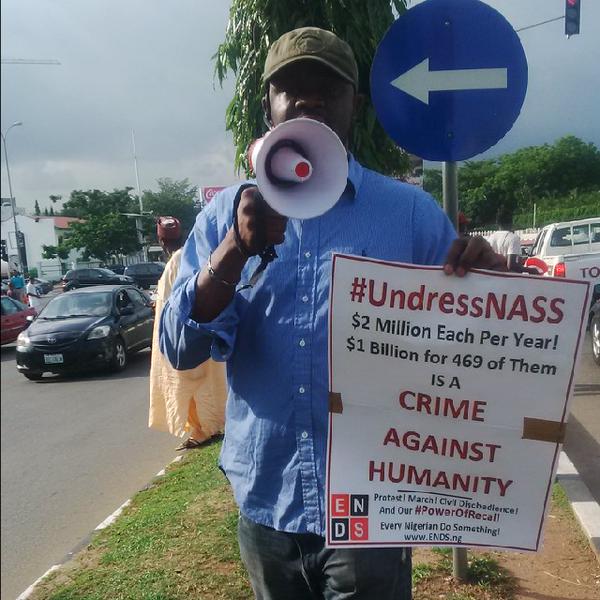 We enjoin all Nigerians who cannot join our protest to unleash fervent prayers to create internal hardship, pain and chaos among these wicked thieving legislators. To frustrate them as the Lord frustrated out the various evil tyrants and kakistocrats over the past 30 years. To solidify this change for us. To bring victory for us as He did on March 28th and when he helped us eliminate the Babangida, Abacha and Abdulsalami dictatorships and the unhinged ambitions of Obasanjo.

We remind Nigerians of their #PowerOfRecall and encourage those of us who have started strategizing to begin the processes to recall many of these legislators who rigged their way into office or are already abusing the mandate being part of those fighting to keep stealing our national income.

We march for a great Nigeria!

And we will never stop!

*As decided at Friday’s protests, a statement of this letter will be addressed and delivered to the Nigerian President and Senate president during Tuesday the 23rd’s morning’s protests at the National Assembly.