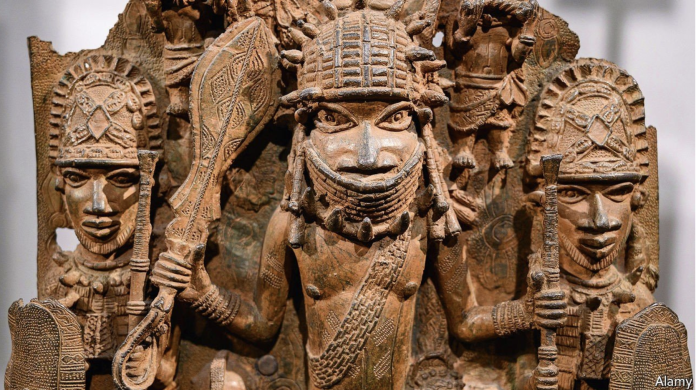 BY BARNABY PHILLIPS: AUTHOR OF “LOOT: BRITAIN AND THE BENIN BRONZES” (ONEWORLD)

In an act of contrition for crimes committed during the colonial era, German museums are expected to return some of their Benin bronzes to Nigeria in 2022. The bronzes are the thousands of metal castings and ivory sculptures that were taken from the west African kingdom of Benin (today in southern Nigeria, and not to be confused with the neighbouring Republic of Benin) by British troops in 1897. They have become emblematic of the increasingly charged debate over colonial loot in Western museums and private collections. Their fame derives both from their exquisite craftsmanship—when they arrived in Europe, critics compared them to objects from ancient Greece or Renaissance Italy—and from the brutal manner in which they were removed by the British from the palace in Benin City.

There are more than a thousand Benin bronzes in Germany (curators bought loot from the expedition on the open market), and museums in several German cities have taken a collective decision to start the process of giving them back to Nigeria. They have been encouraged by the government, as well as a broad consensus among the main political parties. Nigeria’s ambassador to Germany, Yusuf Tuggar, says ownership must be transferred to his country with no preconditions.