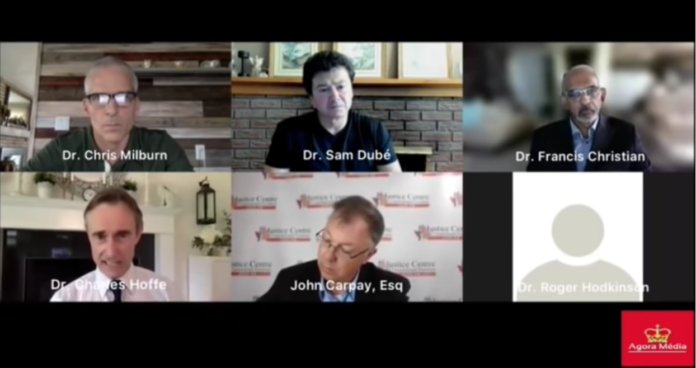 While the establishment blasts non-stop vaccine propaganda, several prominent medical doctors have issued dire warnings that it’s not safe for use in humans.

The declarations going directly against the pro-vax narrative have prompted social media giants to silence and censor the doctor’s views on Covid-19.

Watch these doctors warn about the dangers of the experimental mRNA jabs, which have not yet been approved by the FDA.

During a Zoom meeting with other medical professionals, Lytton, British Columbia, family physician Dr. Charles Hoffe, who was put under a gag order by the Canadian government, claimed many vaccinated people could be dead within three years after he found blood clots in a majority of vaccinated patients due to spike proteins contained in the mRNA jab.

“The concern is: because these vessels are now permanently damaged in a person’s lungs, when the heart tries to pump blood through all those damaged vessels there’s increased resistance trying to pump the blood through those lungs.”

“So those people are going to develop something called ‘pulmonary artery hypertension’ – high blood pressure in their lungs, and the concern with that is that those people will probably all develop right-sided heart failure within three years and die because they now have increased vascular resistance through their lungs.”

In the video, the renowned doctor who is a physician to eminent personalities like the former Israeli Prime minister, president of Brazil, former president Donald Trump and other public figures, laid out his thoughts on the risks versus benefits of administering the covid vaccines to kids in particular and the larger population.

Dr. Zelenko discussed short and long term known and unknown risks including myocarditis in the young, fertility and pregnancy problems in women and risks of autoimmune diseases and cancer among others.

“I’m very worried … that pathway will be used for mass depopulation, because I can’t think of any benign explanation,” Yeadon told LifeSite News reporter Patrick Delaney.

Yeadon echoed the sentiments in an interview with America’s Frontline Doctors, warning people not to go near “top up vaccines,” or booster shots.

“I must return to the issue of ‘top up vaccines’ (booster shots) and it is this whole narrative which I fear will he exploited and used to gain unparalleled power over us.

“PLEASE warn every person not to go near top up vaccines. There is absolutely no need to them.

“As there’s no need for them, yet they’re being made in pharma, and regulators have stood aside (no safety testing), I can only deduce they will be used for nefarious purposes.

“For example, if someone wished to harm or kill a significant proportion of the world’s population over the next few years, the systems being put in place right now will enable it.

“It’s my considered view that it is entirely possible that this will be used for massive-scale depopulation.”

Dr. Yeadon was targeted in a Reuters hit-piece in May which called him an “anti-vax proponent” who “has made unfounded claims” about the health risks associated with the COVID mRNA vaccine.

In the following interview, Dr. Yeadon warns about the dangers of vaccine passports.https://www.bitchute.com/embed/qs9X8Blr4Ucv/

Idaho Dr. Ryan Cole, a board-certified dermatopathologist, gave an unnerving speech at a White Coat Summit last month in San Antonio, Texas, discussing how the “investigational vaccines” could lead to cancer or other ailments down the road.

“What we’re seeing in the laboratory is the shots disregulate your immune response,” the doctor said.

“We have very important cells that keep other viruses in check, that keep cancers in check. There’s a type of cell called a cd8 killer t-cell. Well, there’s a study out of Germany in the Netherlands that showed a shifted immune profile and at the end their conclusion was: ‘We see a concerning pattern of the cells we normally need to fight off these other things,’ but the answer is we don’t know for how long that shifted pattern lasts.

“Well, guess what else that cd8 cell does and some receptors on some of these T-cells called toll-like receptors and there’s a certain pattern of them…they keep cancer in check.

“What’s the real answer? We don’t know and sometimes that’s the most honest answer in medicine is we don’t know. A doctor that tells you he or she knows everything, don’t believe them. Find a new doctor.”

Peter A. McCullough, MD, who authored the American Journal of Medicine’s most downloaded paper on early COVID treatments, testified in front of the Texas State Health and Human Services Committee back in March, discussing how the NIH was not interested in treating COVID-19 until people were hospitalized (and then detrimentally solely focused on vaccines), and how and this philosophy led to tens of thousands of excess deaths.

Dr. Dan Stock of McCordsville, Indiana, warned of antibody-mediated viral enhancement occurring in humans, as it did in every coronavirus study done in animals, during a Mount Vernon school board meeting earlier this month.

“The CDC and NIH have chosen to ignore the very science that they paid to have done,” Dr. Stock said presenting documents to back up the information he presented, such as a study showing Covid particles are so small that face masks do not offer protection against the virus.

New Zealand general practitioner Dr. Damian Wojcik came out against compulsory Covid vaccination citing reports in the US of deaths and severe adverse reactions, in addition to a duty to the code of medical ethics.

MUST WATCH: Dr. Damian Wojcik speaks out against the COVID vaccine. pic.twitter.com/VqYptIXyXI

“My patients are not laboratory rats to be sacrificed in a global vaccine experiment,” the doctor stated.

“In the five months from the 14th of December 2020 there have been 4,434 deaths reported to the USA Vaccine Adverse Event Reporting System,” he said.

“This is more than the combined total for all other vaccines for the entire preceding 10 years and between 113 and 165 times higher than the annual influenza vaccine death rate.”

“It seems to me as doctors we cannot be true to our code of medical ethics and at the same time remain silent in the face of an experimental treatment compelled under duress, fear, threat of losing livelihood, travel restrictions, potential loss of medical, nursing, or university education, and state overreach,” Wojcik stated.

Dr. Angelina Farella of abt4kids.com and aflds.org told Infowars the shots are deadlier than Covid.

“I tried to bring up the fact that for children, with a survivability 99.997 percent survivability, what that means is that basically a one in a million chance of a child dying from Covid.

“However, these vaccines are killing one in 3,000 people. That’s unacceptable.

“There is no reason whatsoever that the safety of the American public shouldn’t be forefront in this, absolutely not. And children should be completely excluded and protected because a great majority of them may be actually already immune and we are harming them.

Italian medical doctor Roberto Petrella last year warned the vaccine is a scheme to reduce the world’s population by 80 percent, and said he’d prefer death over the vaccine.

“Covid-19 means ‘program of mass extermination,’” Dr. Petrella warned, giving a prophetic view of the near-future, which we are currently seeing come to pass.

“Most non-vaccinated people will cease to exist for society.”

“I will prefer death, absolutely not vaccination.”