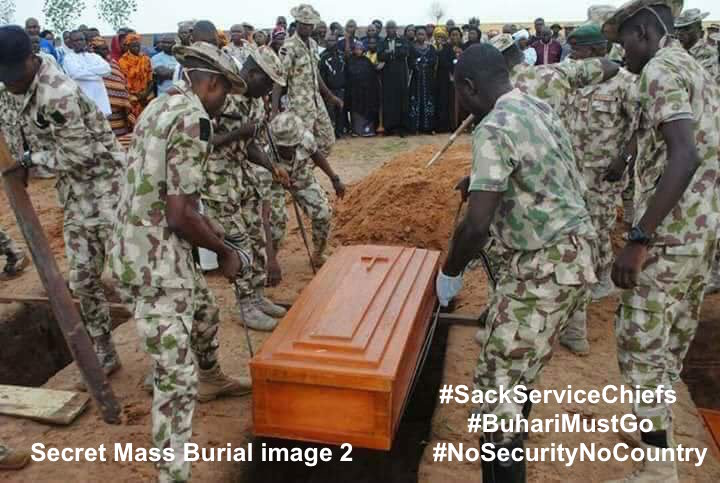 President Muhammadu Buhari on Wednesday repeated his claim that Boko Haram has been defeated and reduced to aiming “soft targets”, but a new report says the group has targeted and killed at least 2,006 Nigerian soldiers in the last three years.

The report by SBM Intelligence, which researches and analyses data on security, politics and economy, was released last week. The data captures military casualties reported by PREMIUM TIMES and other news channels about attacks on soldiers.

Speaking while launching the commencement of armed forces emblem for 2020 in Abuja Wednesday afternoon, President Buhari praised the gallantry of the nation’s servicemen and women in the fight against insurgency, but again dismissed Boko Haram as “only daring soft targets.”

“The nation is appreciative of the gallantry and sacrifices of Officers and Men of our Armed Forces in the campaign against insurgency and other Internal Security Operations,” he said. “This has led to the return of normalcy in affected parts of the nation. The Boko Haram terrorists have been substantially defeated and degraded to the extent that they are only daring soft targets.”

While the president insists the terrorist group has only targeted “soft targets”, evidence as reported in several PREMIUM TIMES articles prove otherwise. Dozens of military units, including at least three brigades, have been sacked with heavy casualties of Nigerian soldiers since June 2018.

The president first said Boko Haram had been defeated and left to attack only soft targets in 2015 when the military launched a reinvigorated campaign against the group shortly after Mr Buhari took office.

The report by SBM Intelligence said since that year, at least 2,482 soldiers have been killed. The report showed an alarming upsurge in annual military casualties since 2016, the first full year of Mr Buhari’s presidency.

Collating the figures from 2011, the report shows that 2014 recorded the highest number of military casualties — 2,789 –in the fight against Boko Haram. That figure fell significantly after Mr Buhari took office, dropping to 189 in 2015.

Showing 1 to 9 of 9 entriesPrevious Next
Source: SBM Intelligence

The military has not published its official estimates of personnel casualties since the war began.

Cheta Nwanze, chief analyst at SBM, said the figures compiled by his firm may be conservative as some soldiers could not be accounted for while the fate of those missing in action remained unknown.

SBM Intelligence attributed the surge in military casualties since 2016 to an ideological shift by the Abu Musab al-Barnawi faction of Boko Haram, which is now the dominant force in the insurgency for its affiliation with the Islamic State in West Africa Province (ISWAP).

While military figures grew, civilian casualties, most of which came from bombing places of worship, residential and commercial areas in the early years of the war, dropped significantly. The report said that likely happened because the Al-Barnawi faction preferred to concentrate its resources on attacking assets of the Nigerian state rather than innocent and harmless civilians.

“This ideological position by al-Barnawi, and ISWAP’s adjustment of its strategy to fit his position, played a crucial role in reducing the number of civilian casualties,” the SBM said.

Although not much is new about the claim because the president and his officials have been repeating it since 2015, security analysts said it was nonetheless baffling that Mr Buhari would refuse to tone down on the claim.

“This is a claim that has been discredited by both local and international organisations,” Sola Olubanjo, a political analyst and security consultant, told PREMIUM TIMES by telephone Wednesday. “It does not conform with reality and a president that keeps repeating is only setting himself for ridicule.”

He said Boko Haram insurgency, which entered its 10th year in July, has been the greatest national security crisis for Nigeria since the Civil War, and its implications should not be trivialised.

“We know the president wants this war to go away as much as every other Nigerian, but the reality is that it is still here,” the analyst said.

The claim that Boko Haram has been defeated was first started by Mr Buhari in 2015, when he proclaimed a ‘technical defeat’ over the insurgents and said they had been reduced to aiming soft targets. It has, however, mothballed amongst his ministers and security chiefs, including the Chief of Army Staff Tukur Buratai.

When Boko Haram launched successive attacks that killed many soldiers on the frontlines in 2017, the president and his officials said the insurgency had been defeated, but attacks were the “last kicks of a dying horse.”

As of March 2019, officials were still using the same lines to downplay Boko Haram attacks in Nigeria’s northeast, with an army commander saying insurgents were able to overrun a local government and the military units around because they were fleeing from soldiers.

Since June 2018, Boko Haram began targeting military bases on an unprecedented scale, raiding brigades and battalions. Asides the death toll of soldiers being left behind in virtually all the attacks, the insurgents often made away with large cache or military food, supplies and hardware, including armoured personnel carriers.

In a single attack in November 2018, no fewer than 118 soldiers, including a lieutenant colonel, were killed when insurgents invaded the Nigerian Army 157 Task Force Battalion in Metele, Borno State.

Boko Haram has carried out successful attacks on military bases in most of 2019. An attack earlier this month killed 11 soldiers and displaced 14.

Military chiefs and administration officials have continued to suppress information from the frontlines, suggesting that public’s knowledge of the war could serve as propaganda for the terrorists and undermine troops’ morale.

But Mr Olubanjo said authorities should focus more on improved welfare and adequate supply of equipment to troops.

“The country may find itself immersed in this war for years to come if equipment and welfare of our soldiers are not prioritised and they continue to complain as they have done over the years,” he said. “No matter how much you try to suppress information or proclaim victory over the terrorists.”

The analyst said the Buhari administration has made progress in degrading Boko Haram’s ability to carry out bomb attacks on Nigerian citizens outside of northeast as witnessed in Abuja, Kano and other cities under President Goodluck Jonathan.

“A lot of work had been put into stopping frequent bomb attacks under President Buhari,” Mr Olubanjo said. “But that should not blind anyone to the prevailing realities in Borno, Yobe and even Adamawa.”

At the launch of armed forces remembrance today, the president urged Nigerians to purchase the remembrance emblem to support the military and families of fallen heroes across the country.

He said all “hands must be on deck to check the attacks on soft targets, mostly innocent Nigerians.”