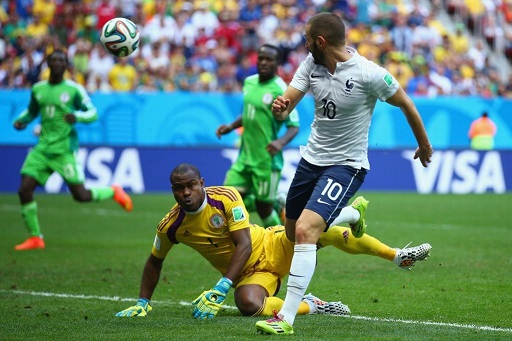 Why did I tell my friends that I hoped and prayed Nigeria soon got knocked out of the World cup? Why did I jump when France scored its first goal against Nigeria and dance when they scored the second? The answer is not that I am not patriotic; on the contrary, I love Nigerian life as much or more than any. It’s simple – Nigeria did not and does not deserve to be at the World cup and does not deserve any sort of ‘victory’ from it.

Where are our girls? Our daughters have been in the jungle, raped and killed by ‘Shekau’ for three long months and our adults are running around a pitch, tapping a leather ball and hoping to dance victory dances? Do we think of all the girls with ‘Shekau’ who are fans of the national team and would have loved to be watching the matches at home as we are? Do we imagine how life is for them… now they have practically acclimatized and accepted their destiny as the ‘prostitutes’ of randy terrorists? Do we imagine what their families – also soccer fans – are going through as we relax and enjoy the world cup games? If we did, where is the evidence?

If it was any other nation, our players would have requested a minute extra for prayers for all the victims of Boko Haram – the Nigerian terrorist group that operates with arms and ammunition from the nations armory and abducted our girls and has continued to kill and bomb freely for four years with under the full impunity of our state security services. But no, our players simply went to play without any respect or compassion publicly showed for the victims of state tolerated and sponsored terror. No, our players did not wear perhaps, red-colored wrist bands in solidarity with the victims of Boko Haram. No, our players did not carry #BringBackOurGirls placards in Brazil, and of course, no, they did not do the ultimate – refuse to play, damning and staking all to stand for justice.

What use would a victory have been for us? Who is ‘us?’ What nation do we have that deserves a victory? Are we a people? What global opportunities do we expect to gain from a football victory? What globe? Is it the same global players who came to Nigeria to allegedly help us rescue our girls, but rather switched to installing their agenda in Nigeria immediately they arrived, forgetting the mission for which they were given a limited invitation? Is it for accolades and credits from the same world that has sponsored the destruction of Libya, Syria, Iraq, Bosnia and what have you… that we want to please by proving we can play football?

If these innocent girls were kidnapped in any other nation on earth, an armed search party of thousands of civilian volunteers would have set out three months ago to comb the jungles of and around Sambisa for these girls and the hundreds of other girls and boys abducted before and after April 14, 2014; but not Nigeria: we all sat down, at best, carried placards or sent out tweets with a certain hashtag, and then we bought popcorn and coca cola and sat back to watch Nigeria ‘win.’

I rejoiced in our loss. We deserved it for more reasons than one. We are a nation at loss. We are a lost nation.