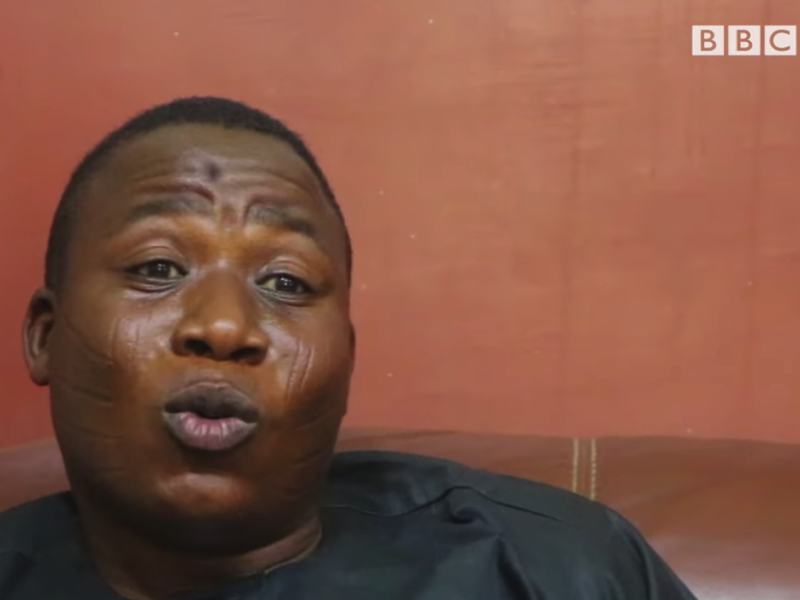 A source privy to his departure from Nigeria said he had perfected plans to secretly escape from Nigeria through Cotonou and was heading to Germany.

He was, however, nabbed by security operatives in the neighboring country.

Speaking with SaharaReporters, a source privy to the incident, said, “Sunday Igboho has been arrested in Cotonou. He was arrested about an hour ago.

“He was supposed to travel to Germany through Cotonou this night. He wanted to leave Africa through Cotonou. He was arrested by security operatives in Cotonou.

“They are planning to bring him back to Nigeria.”

Recall that the Department of State Services had declared Igboho wanted after its operatives carried out a  bloody midnight raid on his residence in the Soka area of Ibadan, Oyo State.

DSS Public Relations Officer, Peter Afunnaya, had advised Igboho to turn himself in to the nearest security.

“Those cheering and eulogizing him may appeal to or advice him to do the needful,” Afunnaya said. “He should surrender himself to the appropriate authorities. He or anyone can never be above the law.”

Pelumi Olajengbesi, one of the lawyers representing Igboho and others arrested in his House, told SaharaReporters he had not confirmed the news of Igboho’s arrest in Cotonou.

“I will contact Yomi Aliu (SAN) to verify the news,” he said.

How He Was Arrested

Igboho, a campaigner for Yoruba self-determination, was arrested in neighbouring Cotonou, Benin Republic, while trying to travel to Germany.

He was “disembarked from his plane, arrested by the Beninese police while he was trying to travel to Germany and then transferred to the Cotonou Criminal Brigade.”

It was learnt that under the agreements between the two countries, Mr Igboho’s extradition should be concluded without hindrance.

While the Nigerian government is yet to speak on the development, reactions have started pouring in from different Yoruba groups.

Mr Igboho’s lawyer called on the government of Benin Republic to prevent the extradition of Mr. Igboho to Nigeria.

“I call upon you to rise up and curb the impunity of the Nigerian Government by refusing any application for extradition of our client who already has an application before the International Criminal Court duly acknowledged,” he said in a brief statement seen by PREMIUM TIMES.

A Yoruba nation agitation group, Ilana Omo Oodua, led by Banji Akintoye, said in a statement Tuesday that it is “currently working to provide assistance for Ighoho to prevent his extradition into Nigeria.”