The leader of the Oodua People Congress (OPC), Dr.  Fredrick Fasehun, has said that he supports the judicial freedom given to Major Hamza Al-Mustapha, the former Chief Security Officer (CSO) to late Gen. Sani Abacha.

Fasehun, who spoke today at the Yoruba Community Association (YCA) hall in Kano where he was received by the Yoruba and the OPC Kano Chapter, stressed that Al-Mustapha was exonerated by a competent court of the land in the death of Hajiya Kudirat Abiola, wife of the acclaimed winner of the June 12, 1993 presidential election, late Chief Moshood Kasimawo Abiola.

At the occasion, the deputy president of the YCA in Kano, Jerry Agunbiade, commended Chief Fasehun for his noble role in following Major Al-Mustapha on his return to Kano.

The OPC boss called on all patriotic Yorubas to be grateful to God that throughout out the period Major Al-Mustapha was in the Kirikiri Maximum Prison, nothing harmful happened to him, nor did he die there, saying it demonstrates to the world that the Yoruba are detribalized and always stand by justice and equal rights.

The OPC leader noted that it was well known that the same Major Al-Mustapha did everything possible to save the life of late M.K.O Abiola and also allowed his wife Kudirat Abiola to visit to him, asking how the same person could have killed Hajiya Abiola.

He said there was no reasonable evidence to nail Major Al-Mustapha as the killer of Kudirat Abiola, adding that the fear of God was why he decided to join others to support freedom for Al-Mustapha.

“I resolved to spearheaded bringing Major Al-Mustapha to the ancient city of Kano, to let them know that though we lost our sons and daughter during the June 12, 1993 presidential election, but we still believe in the fact that since court has exonerated Major Al-Mustapha, we Yoruba had nothing against him,” Fasehun said.

Charging the Yorubas always to fight for their right, the OPC leader pointed out that the pathetic and saddening aspect of Major Al-Mustpha’s trauma during his trial was that all the witnesses brought to court later came back and withdraw the statements earlier made that the former CSO sent them to kill Hajiya Kudirat.

“The funny aspect was that the very justice that pronounced verdict that Major Al-Mustapha should be hanged ran away to overseas because she was called to sign the court verdict, which the Appeal court later discovered that it lacks transparency,” he said.

Observing that some people may be calling him as a betrayer of the Yoruba because of the action he was taken, he said that posterity will never forget him, who knows what could have befallen the Yoruba resident in the Northern States of the country, although those in the South would not have had a problem.

He then stated that at his age, 78, he was not looking for anybody to give him money, but would always fight for Yoruba freedom and has always called on the Yoruba to unite and fight a common cause.

He praised the legacy of late Chief Obafemi Awolowo, saying that no Yoruba leaders have been able to walk in his shoes, drawing attention to his various achievements, including free education and the first television service in Africa.

“Let those so-called Yoruba leaders in politics tell us what they have done,” he challenged, “Rather, they were using their position to create enmity, rancour and acrimony among the Yoruba.”

Chief Fasehun said it was that concern that made him and other patriotic people to form the defunct Unity Party of Nigeria so the those people who believed in the principles of Chief Awolowo could work together.

In his contribution, Chief Agunbiade said the Yoruba were grateful for the kind gesture of the governor of Ondo State, Chief Olusegun Mimiko who donated the sum of N6 million when the Yoruba were trying to purchase a building for the Yoruba race.

Also speaking, the former president General, Dr. Jimpat Aiyelangbe, commended Dr. Fasehun, drawing attention to his role despite the campaign of calumny mounted against him, and urged him to continue to fight for the unity of the country.

The governor of OPC, Alhaji Shaq Olorunfemi, expressed happiness that at last their leader has visited the Yoruba in Kano, saying that the group stands for the liberation of the Yoruba race. 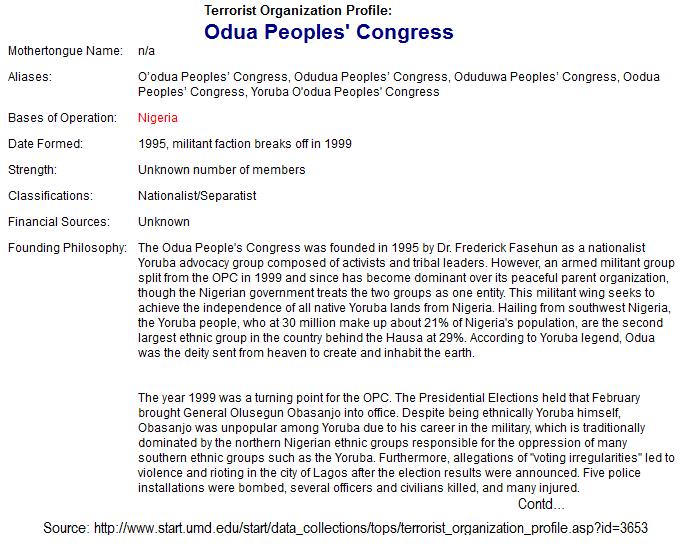