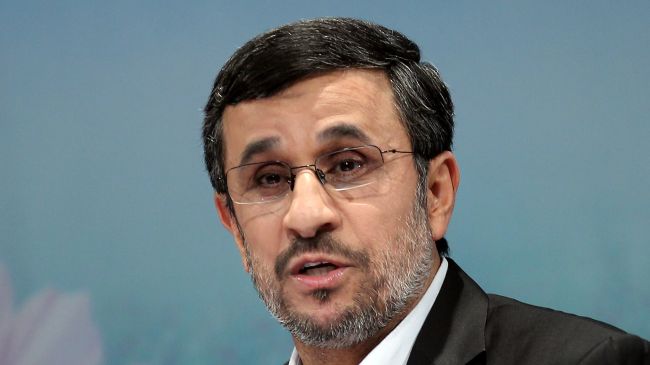 July 19, 2013
Iran’s President Mahmoud Ahmadinejad says the Zionist regime of Israel is always in pursuit of turmoil and violence in the region and so regional countries should foster unity to thwart its divisive plots.

“Zionists want Turkey, Libya, Egypt and other countries to always be in a volatile situation; so given such behavior, we should extend the hand of brotherhood to one another more than ever,” Ahmadinejad said in a meeting with Iraqi Parliament Speaker Osama al Nujaifi and the country’s lawmakers on Thursday .

He added that certain enemies, including Israel, take pleasure in seeing some of the countries in the region gripped in turmoil “because they do not want [regional] countries powerful and making progress.”

Pointing to the recent events in Egypt, the Iranian chief executive said the continuation of violence in the Arab country will “harm a strong pillar in the region,” which, he added, will lead to a rise in the number of casualties on all sides, and that will gratify the enemy.

Tension in Egypt has intensified since the Egyptian army overthrew President Mohamed Morsi, suspended the constitution, dissolved the parliament on July 3 and declared the chief justice of Egypt’s Supreme Constitutional Court, Adly Mansour, as interim president the following day.

Dozens of people have since been killed in the wave of violent clashes between Morsi supporters, his opponents and security forces.

Touching on bilateral ties, Ahmadinejad hailed Iran-Iraq cooperation as constructive and growing, and said there is no division between the two countries today.

He also highlighted the Iraqi parliament’s instrumental role in strengthening international relations as well as national unity, adding that Iraq is treading the path to power and security.

Iran and Iraq can play a significant role in creating an understanding among regional countries, he pointed out, saying that Iran will use everything in its power to promote solidarity and unity in the region.

Also in a press conference on Thursday, the visiting Iranian president told reporters that Iran and Iraq play an outstanding role in ensuring regional security and progress.

Ahmadinejad said the possibilities are endless when it comes to the expansion of Tehran-Baghdad ties, and that “the two countries are determined to fully tap into their potential to consolidate and expand relations.”

Heading a high-ranking delegation, the Iranian president arrived in Iraq on Thursday for a two-day official visit aimed at further expansion of bilateral relations between the two neighboring countries.

On the first day of his visit, he also met with Iraqi Prime Minister Nuri al-Maliki and Vice President Khudayr al-Khuzai. -PressTV