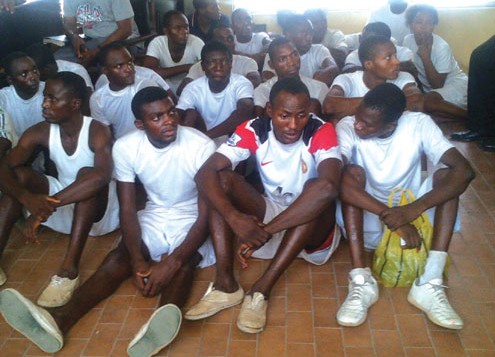 Indications have emerged that over 100 police trainees at the prestigious Nigeria Mobile Police Academy in Gwoza, Borno State went missing shortly after the attack by members of the Boko Haram sect.

The Boko Haram insurgents group few days ago attacked the college, reportedly killed some of the police trainees and took over the college.

According to report, the police has already launched a search for the missing police trainees, some of whom are believed to have been sighted in Yola and Mubi in Adamawa State, while the where about of some others is unknown.

The police was said to have made an attempt to gain access to the academy where the insurgents have hoisted their flags, but could not gain access.

The Boko Haram sect yesterday mounted a blockade on all routes leading to Gwoza.

But a reliable source in the police, however, confirmed that a roll-call of those on training was being conducted last night to ascertain the actual number and list of those in the academy.

According to a reliable source who is central to the management of how to retake the academy, none of the trainees could be located.

The source said: “Preliminary findings showed that the insurgents invaded the school in the morning when most of the mobile police trainees were in their training shorts and vests.

“We are talking of more than 100 trainees missing. If the academy is at its full capacity, it can take up to 1,000 policemen either trainees or those for in-service training. None of the police trainees has officially got in touch.

“They overran the academy, burnt some parts of it and hoisted their flags. All those in the school fled and we cannot account for their whereabouts.

“Yesterday some of the trainees were said to have been sighted in Yola and Mubi where they got in touch with their superiors and relations. We are suspecting that some of these trainees might have also managed to escape to their squadrons.”

Responding to a question, the highly-placed source said: “We cannot rule out if any of the trainees had been captured or not by the insurgents because it was a sudden invasion and the topography is hilly.

“As I am talking to you, neither the military nor the police could gain access to Gwoza, either to reclaim the town or the academy.

“Boko Haram insurgents have taken over the entire Gwoza and mounted blockade to deny  the police and other security agencies access to the place. The insurgents are in charge of the place now.”

The source said the police management has ordered a roll-call of those nominated for training in the Academy to “at least get a list of the trainees.”

“We have started  the search for them from the roll-call. We  will now get in touch with their  superior officers, colleagues, relations or next-of–kin  if they have heard from them.”