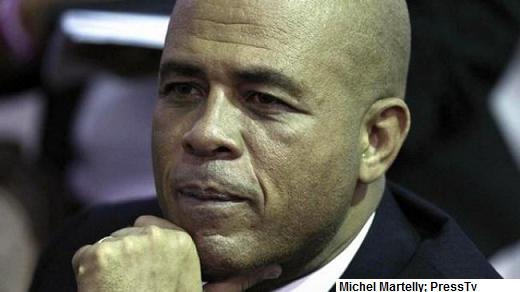 Thousands of Haitians have taken to the streets of the nation’s capital to protest against US meddling in the country’s internal affairs and demand the departure of President Michel Martelly.

On Friday, demonstrators marched toward the US Embassy in the Caribbean nation’s capital Port-au-Prince, carrying banners asking for President Barack Obama to stop supporting President Martelly.

Riot police blocked the area with barricades–part of what was protested as US monitoring of internal affairs–but protesters took a back route to reach the embassy compound where they met police stationed with tear gas.

The demonstrators set fire to automobile tires and pelted rocks at the police. Four protestors were taken into custody.

The protesting Haitians expressed dissatisfaction with President Martelly’s government, which is recognized to be supported by Washington.

“We ask the ambassador to rid the country of the president that the Americans installed in power,” protesting, Jean Max Edouard, said.

Another protester, Jude Saint-Ame, denounced the control over Haiti by the US, saying “Haitians must be able to demonstrate where they want, without restriction.”  Read full…