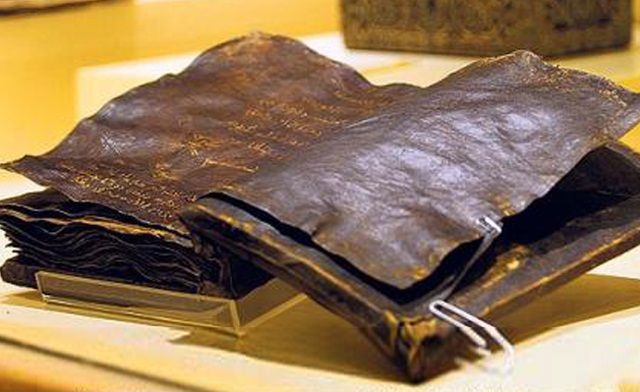 An approximately 1,500-2,000-year-old Bible has been found in Turkey, in the Ethnography Museum of Ankara.

Discovered and kept secret in 2000, the book contains the Gospel of Barnabas – a disciple of Christ – which shows that Jesus was not crucified, nor was he the son of God, but a Prophet.  The book also calls Apostle Paul “The Impostor”.  It also claims that Jesus ascended to heaven alive, and that Judas Iscariot was crucified in his place.

A report by The National Turk says that the Bible was seized from a gang of smugglers in a Mediterranean-area operation. The report states that the gang was charged with smuggling antiquities, illegal excavations, and the possession of explosives.  The book itself is valued as high as 40 million Turkish Liras (approx. 28 million Dollars).

According to reports, experts and religious authorities in Tehran insist that the book is original.  The book itself is written with gold lettering, on loosely-tied leather in Aramaic, the language of Jesus Christ.

The text maintains a vision similar to Islam, contradicting the New Testament’s teachings of Christianity.  Jesus also foresees the coming of the Prophet Muhammad, 700 years later.

It is believed that, during the Council of Nicea, the Catholic Church picked the gospels that form the Bible as we know it today; omitting the Gospel of Barnabas (among many others) in favour of the four canonical gospels of Matthew, Mark, Luke and John.  Many biblical texts have begun to surface over time, including those of the Dead Sea and Gnostic Gospels.

The Vatican has asked Turkish authorities to let them examine the contents of the book.