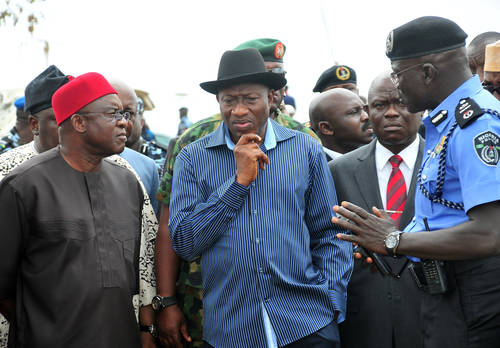 President Goodluck Jonathan on Tuesday declared that Nigeria cannot be transformed overnight, saying that the development was a gradual process.

Jonathan made this affirmation shortly after the Primate of the Church of Nigeria, Anglican Communion, Most Revd. Nicholas Okoh, conferred on him the Primatial Award of Excellence in Christian Stewardship at the Presidential Villa, Abuja.

The president noted that he was satisfied that his administration was making tremendous progress in the right direction and promised that he would remain focused to better the lives of Nigerians.

His words, “We have our transformation agenda. It is not something we can do overnight. Even if you have all the money in the world, if you want to build a six-storey building, you must give yourself a period that must be a time for you to complete that project.

“We have drawn our map and we have progressed. I believe we are progressing in the right direction. For you to really build a society, you need to do things that are critical and continue to do them well. And those things will now change the world that we are.

“If we take issues of economy, transport, infrastructure, those things that will improve on the economy. And if the government continues to do those things very well, it would not take a lifetime for this country to change.

“It does not take more than 10 years; most of these countries that changed, they did it within a space of 10 years and we see major changes. We will make sure the younger generation no longer experience what we are going through.”

He admitted that though the country had been passing through turbulent sea, but all would soon be better.

Jonathan was presented with a medal, a plaque and a copy of the Bible.

Speaking earlier, Okoh described every leader as a steward under God to dispense service to those he led.

He said the church, by the award, averred that Jonathan had so far shared and allocated the nation’s resources to all Nigerians fairly and justly.