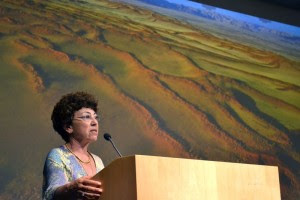 It has been rated that 20 million of people living in the Sahel go to sleep hungry every night due to unceasing menace of desertification.

This estimate was given by the Executive Secretary of UNCCD, Her Excellency, Monique Barbut who was also the special guest of honour during the Great Green Wall side event organised by the African Union Commission (AUC), UNCCD and FAO as part of the recently concluded session of the Conference of Parties to the United Nations Convention to combat Desertification (UNCCD COP12) in Ankara, Turkey.
The Executive Secretary who appealed passionately to the participants on the strategic importance of the GGW, also offered a personal commitment to ensuring its success, saying her heart has always been on the initiative of the programme. She described the Great Green Wall as the modern World’s greatest endeavour that symbolizes man and nature coming together to overcome some of today’s most urgent challenges; climate change, food security, Migration, and of course land restoration
She also said GGW is more than simply growing trees, but growing solutions and opportunities, resilience to climate change, green jobs that provide a suitable income for African women and youth, food security among others.
She committed the UNCCD to embark on scaling up the GGW initiative through partnership with the African Union Commission (AUC) and other stakeholders involved in the cause of curbing the menace of desertification.
Dr. Elvis Paul, AU GGW Coordinator during a presentation at the event, pointed out that GGW had become a global platform for combating land degradation and desertification. He reiterated the general call for a similar initiative in other regions of Africa and taking best practices to the Caribbean and Pacific regions.  He said the GGW will also play a central role in promoting Global Land Degradation Neutrality (LDN) and Sustainable Development Goals (SDGs).
During the panel questions and answers involving key players of GGW, Goni Ahmed the Director General, National Agency for the Great Green Wall (NAGGW) who led the Nigerian delegation narrated the achievements in Nigeria since commencement in 2013, including the establishment of the NAGGW as an Institutional Framework to coordinate the implementation of the programme.
He commended the commitment and enthusiasm shown by the Federal Government of Nigeria through a sustainable financial Mechanism put in place to ensure smooth implementation of the GGW initiative. He appealed for financial and technical support from Development partners to ensure the success of the programme.
At the end of the event, there was a clear message, which is that, the potentials that exists both at local, national and regional levels needs to be topped to develop public and private partnerships, so that through African’s Great Green Wall, a “World Wonder” can be grown that will serve all humanity for generations to come.
Larai Daze
H (PPRU)