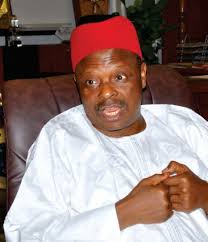 Ahead of the All Progressives Congress (APC) National Convention, Kano State Governor Rabiu Musa Kwankwaso, yesterday visited Senate President David Mark and other members of the APC at the National Assembly to present his score card to the leadership of the house

The Nation newspaper reported that Kwankwaso, during the visit to the National Assembly stressed that though the APC’s constitution provides for both consensus and primary election, the party should go for a consensus presidential standard bearer.

He added that if the party fails to produce a consensus presidential candidate, the party should go for primary, which he said is also good for it.

Kwankwaso said, “I am happy that I left the Peoples Democratic Party (PDP). I am happy that we have a strong party that can defeat PDP. As an aspirant, I came here to brief you about our activities. Our constitution provided for consensus and provided for primary.

“I am personally calling for consensus, but if that didn’t happen, primary is also good for the party. PDP has already defeated itself. All we need to do is to ensure that it does not rise again.”

The Kano State Governor said that there was no doubt that a lot of Nigerians are sick and tired of the existing status quo.

According to him, “any leader, president, governor or local government chairman who decided to divide his people, to me, that leader is a very weak leader. You should convince your people by way of programme and projects; you don’t divide the people on religious lines, north or south, ethnicity and so on.”

Kwankwaso added: “I am very happy that APC was formed and therefore, let me thank all those who have worked so hard, the governors, members of the National Assembly, elders, all those who thought that we need a mega party.

“Now that we have a mega party I am sure the other party is shivering. We have done so much since the formation, ranging from the registration to the formation of the leadership at all levels to the various elections that we had across the country.

“I am happy that I left PDP, I am so comfortable. I am so happy that I have a party, a strong party that is strong enough to defeat the other party.

“Let me also say that as an aspirant that I come here to brief you, tell you that God willing, very soon we will fix a date for declaration and I also want to take the opportunity to invite you to where we are going to have that declaration to support me and through me support the party.

“People are worried and very much concerned about the issue of primary elections. Let me tell you that our constitution has provided for consensus, it has also provided for elections.

“They sit down and look at faces and say ‘you, do a guess work and say, ‘yes’ may be he is number one here but when you go to the field, he may not be number one.

“That is why I am personally calling for a consensus, but if it doesn’t happen, I believe primary election is also good for the party.

“We have seen that since we have quite a number of aspirants, all of us are working, everybody is working very hard especially those of us from PDP, we have a huge advantage, especially my humble self, we have been to so many places.

“We need leadership that will judge somebody by the content of his character, somebody who can ensure that everybody is given what he deserves to get.

“I hope all of us here and even those who are not here will team up together with us to defeat the PDP; PDP has already defeated itself.

“On the other hand, all what we need is to ensure that it doesn’t rise again.”

He also told David Mark: “I am sure you are aware that I am one of the aspirants of the APC.  Of course, I am yet to declare.”