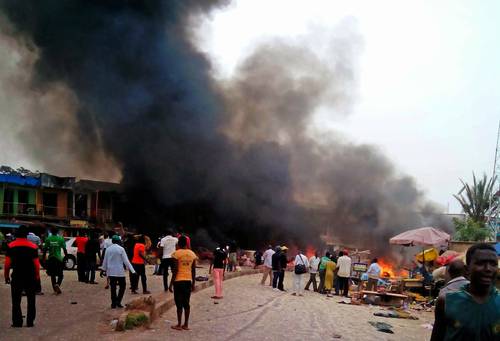 We are living in desperate times now and it’s becoming clear as the days go by that the PDP and President Goodluck Jonathan’s burning ambition to be re-elected would come at all cost even with the blood of Nigerians. The recent bomb explosion in Ife, Osun state has all but exposed the hands of the PDP and shown that Boko Haram is of three types- There is the religious Boko Haram led by Abubakar Shekau which all know, there is the criminal minded ones and there is the political Boko Haram which in the run-up to the 2015 elections everyone would find out is the militant wing of the Peoples Democratic Party (PDP).

In my article some months back on Boko Haram I mentioned the three forms of the terrorist group including the political one. I gave the example of Kano during the 2012 fuel subsidy protest and reminded Nigerians of the church worshippers who were killed according to eyewitness account with semi-automatic rifles, the type issued to government secret service agents, that together with other incidences including the Boko Haram suspects that were arrested in an abandoned Bayelsa state government building in Ijora-Lagos state, plus the bombing in Ife penultimate Tuesday shows for a fact Boko Haram has a political arm used by faces in this present government to terrorise Nigerians (see my article titled Musings on Boko Haram and its Sponsors as published on this medium: http://saharareporters.com/article/musings-boko-haram-and-their-sponsors-its-time-stop-them-or-they-stop-nigeria-ola%E2%80%99-idowu).

The PDP has set the stage for its tactics ahead of the elections in 2015 and its simple- bomb parts of Nigeria and indeed Nigerians and place the blame on the door of the opposition APC. Men like Femi Fani-Kayode are being used to attack them in the press and various online media as sponsors of terror. Isn’t it queer that days after Fani-Kayode accused the APC without proof of having a militant terror wing and an evil character in Musiliu Obanikoro accusing Bola Tinubu and his friends as starting Boko Haram that suddenly Ile-Ife was bombed? Coincidentally, the crown witness in Fani-Kayode’s EFCC corruption case was nowhere to be found when the trial resumed last week, an obvious step towards throwing out the case by the judge for lack of diligent prosecution as scripted by the Presidency and the PDP in exchange for his recruited job of blackmailing the APC and its leaders. The same Fani-Kayode who has no known political constituency and has never won an election as a politician is the one castigating the APC and pontificating for the people of the South-West and indeed Nigerians. He defected to the APC and called the PDP all sorts of names but came back to the same PDP and now the APC is the evil party. A man who called President Barack Obama of the US the Antichrist prior to his re-election in 2012. In a sane and civil society such a man would not be taken seriously and would have been forced to have himself checked to prove his mental sanity but in Nigeria such people bestride our airwaves feeding us with garbage. Obanikoro on his part I wouldn’t blame too much, I lay all the blame on Tinubu’s shoulders. Tinubu it was in 1999 who brought back such dubious anti-democratic element from exile in the US claiming he wanted technocrats and ‘sons of the soil’ in his government.

Tinubu did this against all the advice of Lagosians then who cited how Obanikoro burnt down the ancient landmark City Hall building in Lagos during the Sani Abacha regime when he was the chairman of Lagos Island Local Government and a popular campaigner for Abacha’s life presidency at a time Tinubu was in exile fighting for democracy with NADECO. He didn’t listen and rehabilitated Obanikoro politically, going on to make him a senator in 2003 under the Alliance for Democracy (AD) banner and today his fingers are being burnt with those decisions. Of all the so called technocrats Tinubu brought into government, its ‘non-technocrats’ like Babatunde Fashola and Rauf Aregbesola that are still standing strong by him today. Most of the rest have since bitten the fingers that fed them. I lay the blame on Tinubu for not identifying and even up till now talents amongst the die-hard party supporters who have stood with the party from AD, AC, ACN and now APC and are the foot soldiers who have the grass-root appeal but I believe things are changing now.

An Obanikoro who after leaving the AD for the PDP did not win its governorship primaries in 2007 losing out clearly to Hilda Williams (the widow of the late Funsho Williams) but the ticket was still given to him by Bode George and then PDP chairman Ahmadu Ali. His campaign in 2007 proved to be the most violent in the history of Lagos state perhaps in the entire South-West. Every single campaign he held from Idumota to Ojota to Ikeja, at least five AC supporters and innocent bystanders were killed in hails of bullets. It was the darkest time I ever witnessed in the history of Lagos state not even Abacha’s regime was that terrifying in the state. It was so bad, Lagosians were asking themselves if Obanikoro’s thugs kill everyone, who would be left to vote for him on election day? Not surprisingly he lost the election by a handsome margin. Now, that same terror template is being imported into the West ahead of the elections in Osun state on August 9th and the elections in 2015.

In the lead up to the elections in Osun state, Ile-Ife (where PDP candidate Iyiola Omisore hails from) has been bombed and obviously it would be pinned on APC by the likes of Omisore, Obanikoro and Fani-Kayode. The plan is to get Omisore interacting with the masses eating pop-corn and climbing iron horses (okada) and claiming to the popular with people, then the political Boko Haram, the militant wing of the PDP would be bombing parts of Osun state including Ife and claim its the APC doing it because they are jittery of him winning like Fayose did in Ekiti state and they are trying to stop him campaigning especially in Ife where he hails from.

Its the same template they would use across the whole South-West so as to win sympathy for President Jonathan and claim the APC are the demons who have prevented him from performing and that is where I worry. The real Boko Haram promised to bring their campaign of terror to the South particularly our oil refineries and oil installations in Rivers, Bayelsa and Delta state but definitely not Ife. Everyone remembers Akure prisons was attacked by people suspected to be Boko Haram but it was to release their members jailed there, but they have no reason to bomb Ile-Ife. Lagos state naturally is a target for any terror organisation as its the commercial nerve of the country but the state government has done well so far to limit attacks there through prompt intelligence operations and arrest of suspected extremists and aliens including the ones arrested in the Bayelsa state government lodge in Ijora but to bomb Ile-Ife is far-fetched for the real terrorists as it gives them no political mileage. The APC governor in Osun state, Aregbesola, cannot bomb his state as that would be senseless. The bombers were clearly the militant wing of the PDP, the political Boko Haram who would soak the feet of Jonathan in blood so as to get re-elected.

There is clear danger for the Yorubas, Nigerians and indeed the opposition APC as this PDP government of Jonathan is ready to turn their terror machine on everyone. The signs are as clear as daylight, and places where they feel they would struggle for votes like in the South-West would be the epicentre of bombing campaigns. Expect to see their activities increase in Osun state, then they move to Lagos, Ogun and Oyo state with more bombings as all those places are controlled by the APC. On standby would be the likes of Fani-Kayode and Obanikoro to blame it on Tinubu and APC and try to turn the people against him rather than against Jonathan who has shown generally, he does not care about Boko Haram believing they are killing Northerners anyway so its none of his business. But for me these terror war has become personal as I have families in Lagos and Ogun, lots of friends in Oyo and Osun state. Its also time Tinubu, APC governors and stalwarts organise a high-powered emergency security meeting (call it the COBRA meeting like the UK Prime Minister chairs when there is clear danger) and face this new threat from the PDP’s Boko Haram militant wing who are hell bent on bombing Yorubas and indeed Nigerians in the South-West to death.

In part two of this article I would highlight why the life of the Ooni of Ife is in danger and he needs urgent security protection before his cousin allegedly kills him and pins it on Boko Haram, APC and Tinubu who was reported to have generally made some remarks against some Obas in the South-West. I would also explain why the lives of Obas in Yorubaland are at risk (Boko Haram has killed and attempted to kill Emirs in the north ,so its easy to kill an high profile Oba in the west by PDP’s political Boko Haram and blame it on Tinubu), while I would give my recommendations to the APC on what needs to be done urgently before things gets out of hands. Also I would give my one pence advice to President Jonathan and hopes he listens, as he has surrounded himself with immature, power hungry and evil men who would assist him in bringing our country to the end.

Ola’ Idowu a Management Consultant and Researcher writes in from the UK.